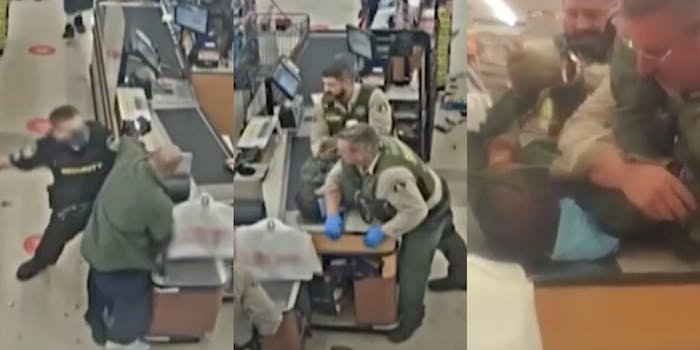 After indigenous man dies in police custody, video shows he was pinned down on torso

The altercation was reminiscent of the events leading to the death of George Floyd in Minneapolis.

In a new video released this week, Riverside County Sheriff Chad Bianco shared details concerning the death of 33-year-old Ernie Serrano, who died while handcuffed in police custody inside a Jurupa Valley grocery store. His death has reinvigorated calls for police reform online, while questioning police escalations and handling of mental health or addiction crises.

“This is in the interest of transparency,” Bianco claimed during a media briefing at headquarters, according to ABC 7. “It is a sad and tragic event for all of us. My condolences go out to the family.”

Serrano, an indigenous man of Jurupa Valley, died on Dec. 15 following a struggle with deputies at a grocery store on Crestmore Road. The altercation was reminiscent of the events leading to the death of George Floyd in Minneapolis.

Per the ABC 7 report: “Authorities say Serrano tried to grab a security guard’s gun during the incident at a grocery store. They allege he fought with the guard and then with deputies who were trying to detain him, but Serrano refused to comply with the deputies’ commands.”

Bianco reported during the press conference that Serrano had methamphetamine, marijuana, and other drugs in his system from an initial autopsy.

Bianco said confrontations with Serrano began the day before on the evening of Dec. 14, when his family called 911 suggesting he was in a mental health crisis, and “not acting rationally, and was out of control.”

Deputies arrived and found Serrano, who Bianco made sure to list as an ex-convict, as “belligerent, aggressive and displaying obvious signs of being under the influence,” per the sheriff.

“Deputies used a Taser to force Mr. Serrano to comply,” Bianco said. “He was treated at a local hospital and taken to the Robert Presley Detention Center.”

Authorities booked Serrano on suspicion of being under the influence of a controlled substance and felony obstructing a peace officer. Serrano was let go on his own recognizance the following morning because the county correctional system operates under capacity restrictions due to the coronavirus pandemic.

That evening on Dec. 15, Serrano went to the Stater Bros. Market. According to the ABC 7 report, for the next few hours he “floated in and out of the store, exhibiting bizarre behavior, ‘cutting in front of people in the shopping aisles’ and on several occasions trying to buy goods by offering his driver’s license as a payment device, according to the sheriff.”

The tape shows the suspect going from one checkout lane to another, cutting in front of customers, or attempting to make transactions while others completed their own. Multiple store employees, including managers, engaged Serrano. There was no aggression in his or the employees’ actions.

An armed security guard was apparently called to the location and confronted Serrano in a checkout lane. He attempted to escort Serrano away from the store; however, it escalated into a fight as the guard continued pulling Serrano to the front of the store.

According to the video footage, deputies hurried into the store, with the conflict ongoing.

“Our deputies intervened and tried to detain Mr. Serrano, but he did not comply,” Bianco said. “A Taser was used, and he fell to the ground, but then he got back on his feet.”

From the video, the victim did not show any aggressive behavior in the presence of the deputies. Despite no one being in any apparent danger of life or limb, deputies did not call for mental health assistance and continued aggressive tactics.

Serrano was battered with a baton and subsequently tackled by another deputy, from a camera phone video. The group of deputies finally corralled him, forcing him onto a checkout counter. They used two sets of handcuffs to restrain him.

“My name is Ernie Serrano!” Serrano shouted, giving his date of birth. “Let me go! Let me go! Why did you tase me?”

Serrano bled heavily from a gash over his left eye. Blood flowed into his mouth, and he needed to spit numerous times. According to Bianco, a “spit shield” was placed over his head.

“Take the mask off!” Serrano said, coughing and obviously short of breath.

Deputies held Serrano on the checkout counter, frequently asking him to calm down. For seven to eight minutes, his torso remained compressed over the counter.

One of the deputies eventually asked if Serrano was still breathing.

CCTV evidence shows the deputies placing significant pressure on Serrano’s torso and chest area for minutes after the mask was placed on his face. One of the deputies is shown leaning directly into his upper torso.

Deputies laid Serrano on the floor, removed the handcuffs and mask, starting chest compressions. He was taken to Riverside Community Hospital, where he was pronounced dead.

“The death was determined to be acute methamphetamine intoxication with fatal arrhythmia,” Bianco claimed.

Following his death, Serrano’s family has called for justice and is disputing allegations that he tried to grab the store security guard’s gun. Counsel for Serrano’s family said that the family is also seeking an independent autopsy.

Per Press-Enterprise, Humberto Guizar, an attorney with the Justice X law group, said they would be filing a claim against Riverside County, asking for video evidence from the Sheriff’s Department.