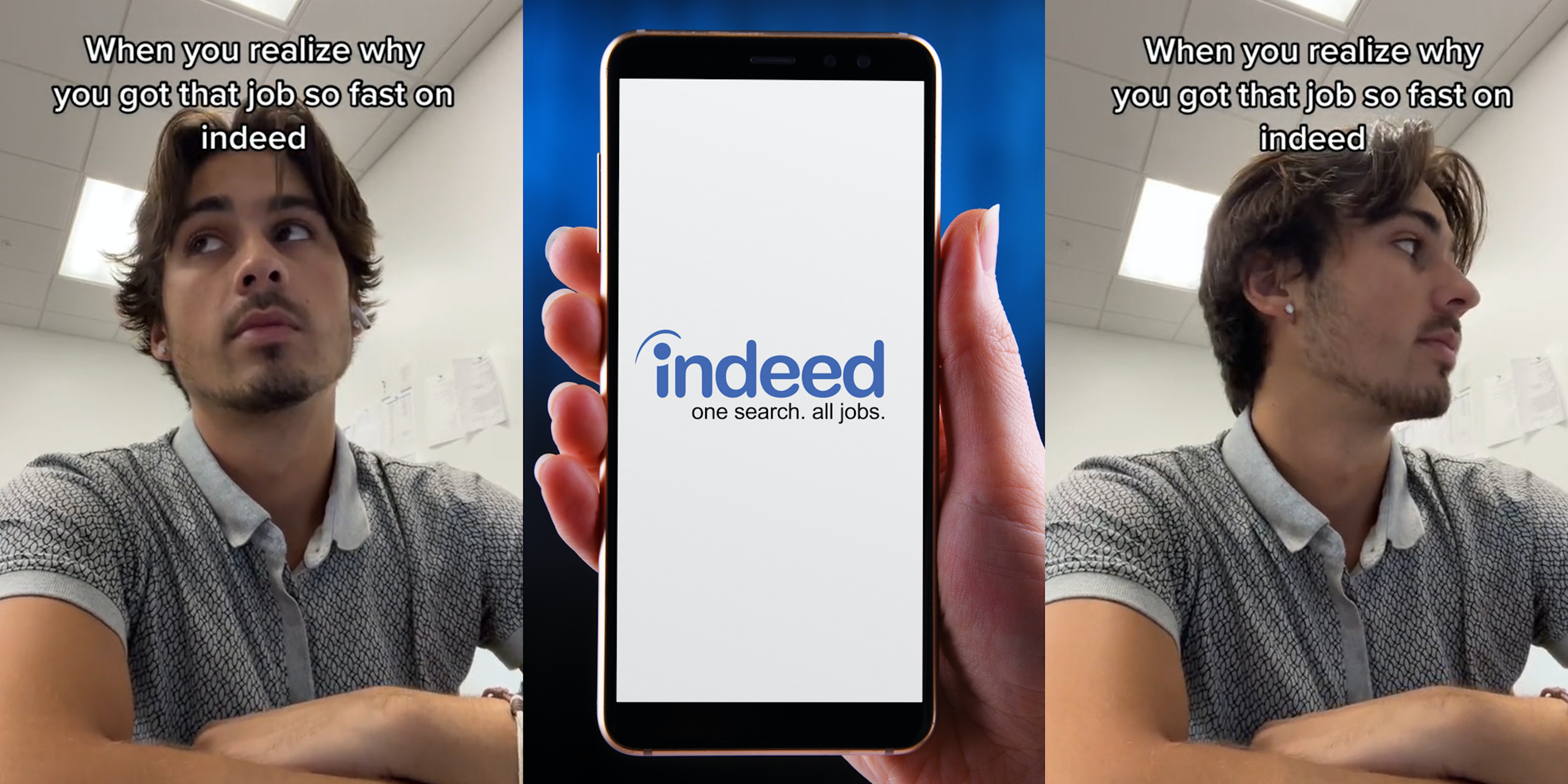 ‘I trained 4 people on my first day at my job’: Worker shares the biggest red flag he’s seen after applying for job on Indeed

Many employers and workers have been taking to TikTok to share red flags about their jobs. And one company keeps sparking controversy online: Hiring site, Indeed.

Indeed is the largest job listing site for both companies and prospective employees. But recently, viral TikTok videos have served as whisper networks for applicants sharing bad experiences that double as warnings. For example, one applicant was immediately rejected after applying for a server job, and another applicant was directed to pay $50 weekly to work for the company that he applied to. And in this viral TikTok video, a man speaks to that suspicious feeling of being hired too fast.

The video features Paul Blackledge (@paulblackledge) as he sits in an empty room. He looks around, wondering where everyone is and suddenly looks sad as he takes a deep breath. The text overlay explains his dismay, “when you realize why you got that job on Indeed so fast,” implying he only secured the job because everyone else left.

Blackledge captioned the video, “Yeah 10 mins in and this isn’t gonna work out,” with the hashtag “#jokes,” implying that this video was satirical.

The video amassed over 621,000 views as of the weekend all the same, with viewers sharing some red flags from employers in the comments that they’ve encountered.

“You know it’s gonna be bad when they don’t even ask questions in the interview, they’re tell you the job and say you’re hired,” one viewer stated.

“When they hire you on the spot,” a second commented.

“When they don’t interview and just give you the job,” a third chimed in.

“When you get a call an hour after the interview,” a fourth said.

Others shared their experiences with sketchy employers.

“I was put on the schedule without even going to an interview,” one person shared.

“You know it’s gonna be bad when they don’t even ask questions in the interview, they’re tell you the job and say you’re hired,” a second wrote.

“I trained 4 people on my first day at my job. They said I should take it as a complement. I should of taken it as a warning,” a third recounted.

“I didn’t even get a job interview and I worked the next day after applying to cover a shift,” a fourth stated.

Typically, the jobs the viewers were hired on the spot for haven’t panned out well.

“I got hired the day after my 30 minute interview. it’s been 2 months and I’m interviewing for a new job,” one commented.

“Got recently hired on the spot and I am regretting it I miss my old job,” a second wrote.

“hired on the spot and quit a week in LMAO,” a third shared.

The Daily Dot reached out to Paul Blackledge via TikTok comment.