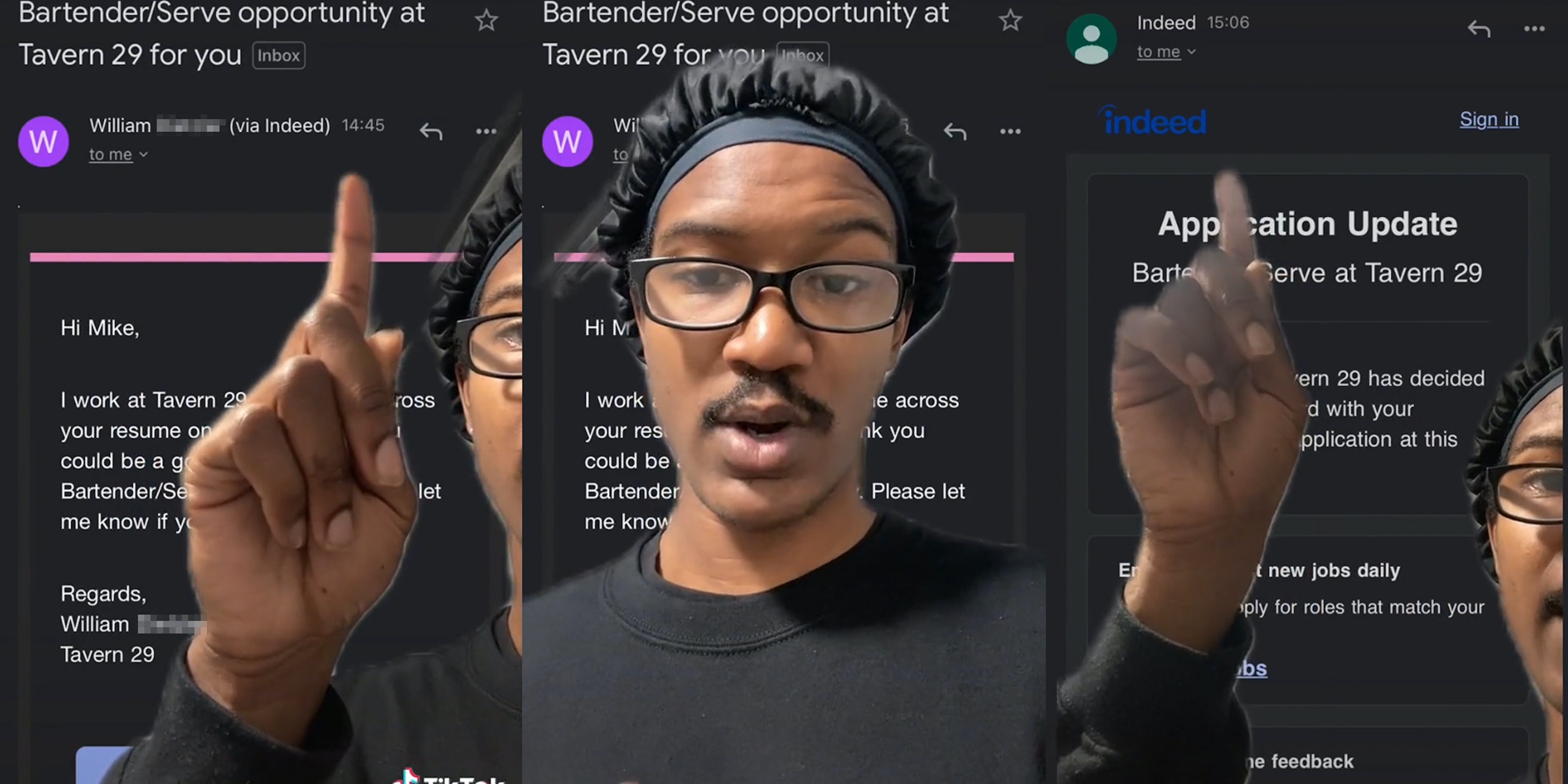 ‘I got rejected from a job at Joanne fabrics in THREE MINUTES. I HAVE A DEGREE’: Man gets rejected immediately after applying for server job on Indeed

After months of employers complaining that “no one wants to work anymore,” the tide appears to have turned against the refrain. Now, average Americans seem to be calling out employers to  question the truth of the claim.

MarketWatch and Bloomberg both pointed out that, not only is the idea not new, but it does not apply to the present state of the American workforce; similarly, numerous TikTokers claimed they’ve applied to numerous jobs to which they are qualified, only to be rejected.

Now, another user on TikTok has gone viral after inadvertently performing a job rejection speedrun.

In a video with over 82,000 views, TikTok user Mike (@soyourethemac) shows an email inviting him to apply for a job as a server. The email comes in at 2:45pm, and naturally, Mike applies.

Soon after, Mike receives an email informing him that the business will not move forward with his application.

“Look at the time! Look at the time,” he says in the video, pointing out the fact he received the email at 3:06pm. This means that, from invitation to rejection, only 21 minutes had elapsed.

@soyourethemac #greenscreen I got reached out to…applied….just to get turned down 21 minutes later. HOW ARE YALL HIRING ATP #unemployment #failedapplication #whoistherecruiter ♬ original sound – Mike Mac

In the comments section, users speculated as to how this might have happened.

“They do this so they won’t have to pay back those loans they got in 2020 and 2021,” one user claimed, referring to the loan program enacted by the U.S. government during the onset of the COVID pandemic.

However, others suggested this may have been an automated process.

“It’s Indeed auto disqualifying you,” a commenter alleged. “I recently discovered this happening to candidates because of an Indeed assist function.”

“I’ve used indeed to hire. There’s a automatic invitation that you can set up, along with automatic rejections,” echoed another.

While Indeed can be configured to automatically reject candidates using its Employer Tools, its website claims it will not automatically send the actual rejection email unless a button is clicked by the employers, or a set number of days have elapsed since the application was submitted.

Still, the lack of clarity about the process can be disheartening to job-seekers, Mike explains in an Instagram direct message exchange with Daily Dot.

“The lack of understanding Indeed’s protocol for seeking employment is detrimental both mentally and financially,” he shared. “As a veteran and a being with mental health issues, [searching for a job] really buried me in my depression. It was, like, for every 5-10 applications that was qualified for, and I got turned down for, I sunk deeper into my mind and asked, ‘what was wrong with my resume? Am I not good enough?'”

To that end, Mike claimed that this “instant rejection” was not a unique experience.

“It [has] happened quite often. Sometimes I’m rejected within 20 minutes. Other times I’m requested to apply just to be sent an email back to be told I wasn’t selected,” he detailed. “I’ve experienced this a lot in my time in NYC. Been here for five years and it’s been one of my biggest issues since trying to obtain housing.”

“This happens to me all the time it’s crazy,” claimed one user. “it took me like 2 months to find a bartending job…I have 7 year’s experience.”

“I had the exact same thing happen except they did it in 5 minutes,” recalled a second. “Three days later they sent another email asking me to apply.”

“I got rejected from a job at Joanne fabrics in THREE MINUTES,” proclaimed a third. “I HAVE A DEGREE.”

The Daily Dot reached out to Indeed and Tavern 29 via email.