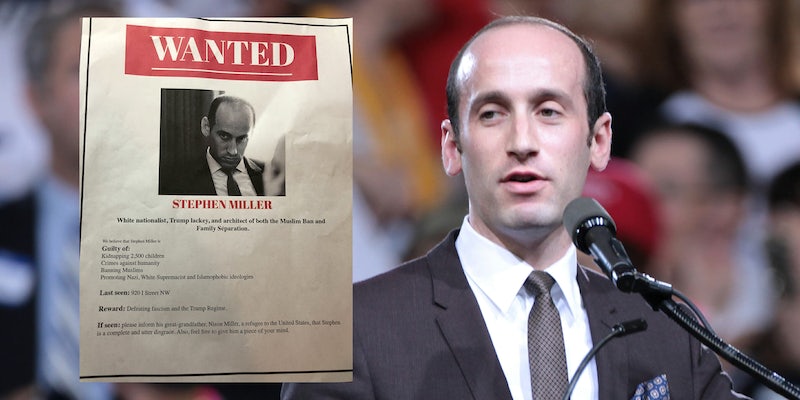 Approximately 20 people gathered outside Miller’s home, according to USA Today, who was not there at the time, as he was accompanying President Donald Trump to a rally in South Carolina.

Miller—who has been at the center of a swirling debate this month over both immigration and civility in politics—was reportedly called a fascist when he tried to dine at a Mexican restaurant in a historically Black D.C. neighborhood last week.

The 32-year-old long-time Trump staffer is widely understood to be the architect behind the president’s “zero tolerance” immigration policy that resulted in children being separated from their parents at the U.S.-Mexico border. It’s a policy that, according to reports, has left him gleeful.

People at Miller’s condo building—a relatively new high-end development in the center of Washington—also reported that “wanted” fliers with Miller’s face were being passed out and put up.

Stephen Miller’s neighbor in CityCenterDC put these posters up. (I wasn’t going to post this one, which I received from a friend I made tonight while getting a pedicure, but I see it is on social media already.) The “If seen” suggests speech not violence. #wanted pic.twitter.com/eldELD9Ukw

Although the fliers’ “if seen” call to action only says to “give him a piece of your mind,” these will no doubt be further fuel in the fiery debate over civility in politics.

In recent weeks, Homeland Security head Kirstjen Nielsen was met by protesters at a Mexican restaurant, and Press Secretary Sarah Sanders was denied service at a restaurant in Virginia. A congressional intern was suspended a week for swearing at President Trump.

Rep. Maxine Waters (R-Calif.) called for Trump officials to continue to be met with protesters wherever they go, which prompted the president to tell her to be “careful what you wish for.”