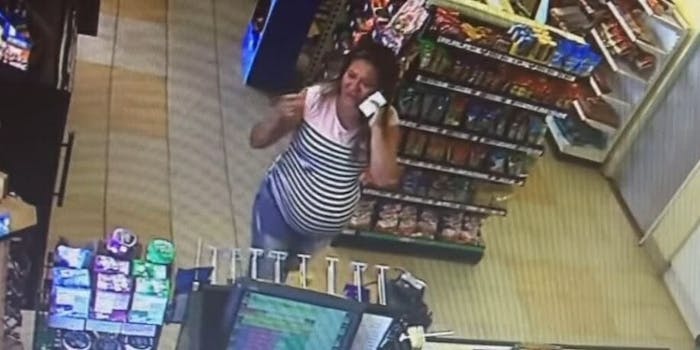 Immigration and Customs Enforcement agents arrested a man who was driving his pregnant wife to the hospital to give birth on Friday.

According to CBS Los Angeles, Joel Arrona-Lara stopped to get gas as he drove his wife, Maria del Carmen Venegas, to the hospital for a planned Cesarean section in San Bernardino, California. But at the gas station, she said ICE agents approached them, asked to see their identifications, placed Arrona-Lara into custody, and drove away, leaving Venegas by herself. She was then forced to drive herself to the hospital to give birth.

After outrage built online on Saturday, ICE said, via Business Insider, that Arrona-Lara is wanted on murder charges in Mexico.

But in its statement on Friday after it arrested Arrona-Lara, ICE didn’t mention a murder charge, and his lawyer told CBS Los Angeles that the Mexican consulate said it didn’t have any information about any possible charges.

ICE said on Friday only that Arrona-Lara was a “citizen of Mexico illegally residing in the United States,” and ABC News reported that ICE might have actually been looking for somebody else.

Here’s surveillance video of the arrest.

Surveillance footage shows ICE agents detaining a man in California stopped at a gas station who was bringing his pregnant wife to the hospital for the delivery of their baby. https://t.co/NrzXyHktdH pic.twitter.com/kesN7U37aW

Venegas said her husband has not been in trouble with the law.

“My husband needs to be here,” Venegas said. “He had to wait for his son for so long, and someone just took him away.”

In its statement on the arrest, ICE said it “continues to focus its enforcement resources on individuals who pose a threat to national security, public safety and border security.”

“They left her at the gas station to fend for herself,” the couple’s legal representative told NBC.