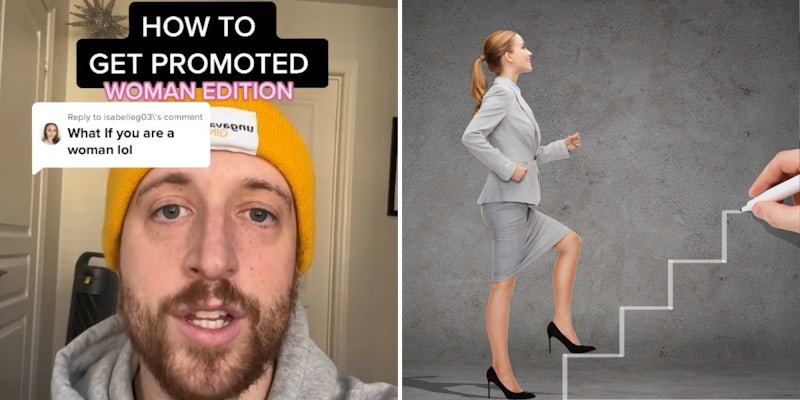 ‘This is so manipulative give me more secrets’: TikToker says this is ‘how to get promoted’ as a woman

A TikToker’s advice for getting promoted as a woman—mostly by manipulating an employer—has attracted viral attention, with 3.4 million views and nearly 4,000 comments left on the video.

The video was posted by Alex Biron, host of the Mean Streak Podcast, who suggests that when beginning a new job in the hopes of achieving promotion, it’s best to start off doing the bare minimum.

“When you get a new job, do just enough to not get fired,” he says in the video. “Don’t come in early; don’t take on any extra work and keep doing that until they expect very little from you. After a while, when you’re ready, make a sudden drastic change, take work home, make a really good impression.”

Biron says this change in work ethic might draw the attention of supervisors with the power to promote you.

“Inevitably your boss will ask you why the big change,” he says. “You’ll tell him that you’ve discovered you can’t have kids and you’ve realized you’re gonna have to get more life satisfaction out of your career, so you’re going to try really hard from now on. He will be really impressed—or she—and jobs often discriminate against women who are going to start families anyway, so those two things combined mean they will promote you without you even asking, and then you’ll move up the company.”

He also said that telling an employer this does not rule out having children. Doing so after using this method just makes it become a “medical miracle.”

“The beauty of this is if you ever decide to have children, it’ll look like a medical miracle, and nobody can really get angry at you for that, so they’ll all be really happy for you. And by then, you’ll have moved too far up the company for them to fire you anyway.”

Viewers think this is a genius idea and asked for more tips. One of the top comments refers to it as “white man secrets.”

“OMG this is brilliant.. after working for 15 yrs in corporate, working harder doesn’t guarantee raises,” another said.

“That is so manipulative,” another commenter wrote. “I need more tips like this haha.”

“That is genius,” a fourth said. “I don’t know how to not take on extra work etc. I’m always convinced I’m about to be fired even when I’m giving it everything.”

Update May 13, 9:50am CT: When reached for comment, Biron told the Daily Dot via Instagram direct message that while the video was mostly intended to be satirical, he is surprised how many people took it seriously.”

“I first did a video where I did, ‘how do you get promoted?’ But it was for guys. I basically said that when you’re starting out, don’t work too hard in the beginning, and then suddenly start to work really hard and tell your boss that you got the girl you’re seeing pregnant and that you need it, like lit a fire under you kind of thing. That was kind of just like a satirical video, but it did pretty well. Then some people in the comments, were asking, like, ‘Oh, is there a version for women?’ I kind of thought about it, and then it gave me that idea for the for the next video that went super viral,” he said.

Biron said that viewers contacted him to tell him they resonated with his video.

“They had already done that in their in their life, either like, directly consciously trying to do that plan or somewhat as an accident. (They) thought they were infertile and then got promoted, and then later found that they were pregnant. So apparently it does work,” he said.