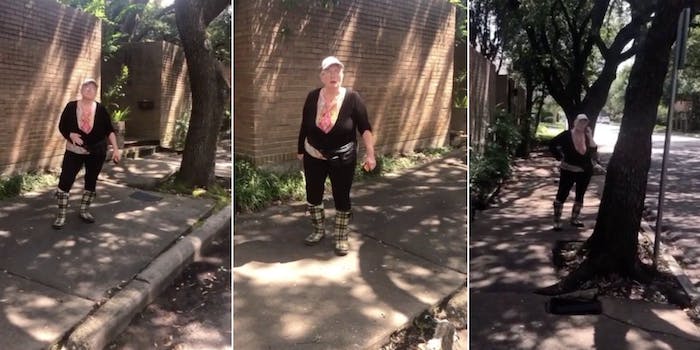 Karen accuses the census worker of 'trying to make a political statement.'

A video recently uploaded to Reddit shows a racist “Karen” in Houston calling the cops on a Black census worker simply for being in her neighborhood.

“You calling the cops ‘cause I’m Black? Is that what it is?” the census worker asks Karen at the beginning of the video, which was posted to r/FuckYouKaren on Sunday.

“No, because you’re in front of my neighbor’s house, and you need to leave,” Karen replies.

When pressed for why he needs to leave, Karen simply tells the census worker, “Because you don’t have a reason to be here.”

“Do you know?” the census worker retorts. “Who are you? Karen, is your name Karen?”

The census worker continues filming Karen as she hobbles down the sidewalk and makes her phone call. He even provides her with physical descriptions to tell the police (5-foot-7, heavyset), and dares her to follow through on her threat.

“Go ahead, call the cops. I’ll wait for the cops, actually,” he says. “Just ‘cause I’m Black and I ain’t bothering you, you think I’m a threat. ‘Cause if I was white, you probably wouldn’t call the cops.”

Karen, meanwhile, mischaracterizes the census worker’s business and demeanor, telling the police he’s “trying to make a political statement” and calling him “threatening.”

“He’s trying to be obnoxious. He’s talking towards me,” Karen says as the census worker stands in one place. “He’s definitely trying to make an issue.”

The video fizzles out as Karen gets off the phone and returns to the front of her house; the cops are apparently “on their way.” Still, the census worker gets in a few more jabs at Karen before she leaves.

“She feel like you gotta bother people,” he says. “See Black people in your neighborhood, you ain’t used to seeing Black people, so you gotta say, ‘Oh, what you doing here?’”

Karen turns back toward the census worker’s camera and tells him, “You don’t need to be here.”

Then the census worker hits Karen with the finisher: “You don’t need to be here. Matter of fact, if your ancestors didn’t bring my ancestors over here, I wouldn’t be here. Blame your ancestors.”