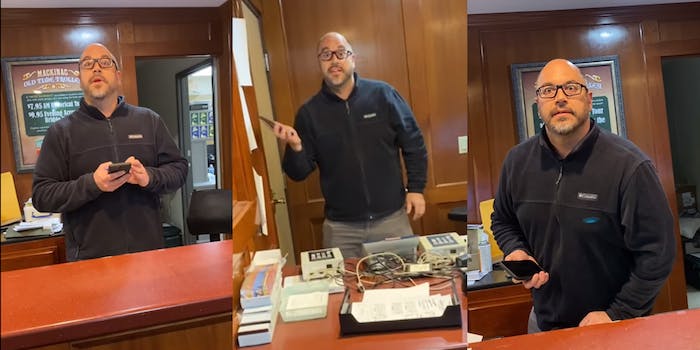 'Stop being an idiot and start thinking with your mind, OK.'

Guests were kicked out of a Michigan hotel after the owner-operator blamed one of the family members for damages from a toilet flood. He called a woman a “piece of shit” and “dumb Democrat” in the process.

Video from the confrontation shows a man at the hotel front desk arguing with a woman who says the bathroom flooded in her room. The man blames her for the issue.

Jennifer Biela uploaded a Facebook video last week of the incident, which took place at the Crown Choice Inn & Suites in Mackinaw City, Michigan. She said she was traveling with her partner and five children.

“I waited [to post] for a couple of reasons, one I needed to make sure the ‘charges’ against me were dropped, and also, I’m a little (very) nervous to put myself out there like this,” Biela wrote. “However, I think it’s important that people see what is going on in this town.”

Biela told Newsweek that after she explained the toilet was flooding in her room, the front desk worker berated her for not shutting off the valve. “He then stated because I refused to shut the valve off, he was calling the police, pressing charges against me for malicious destruction of property, and told me to get my stuff and get out,” Biela said.

The video shows the man saying her, “You rented the room, it’s your bathroom now … You’re responsible for that room.”

“No, I’m not,” Biela replies as the man calls her an “idiot.

“Stop being an idiot and start thinking with your mind, OK, you’re being a Democrat, a dumb Democrat,” he says. He tells her to pack up and leave the hotel.

He continues: “You’re causing damages, and you’re not going to pay for it … That’s a stupid answer. You’re an idiot.

“When you get the police report, you’ll come to your senses.”

She also shows a police report of the event from the Mackinaw City Police Department. She told Newsweek charges for damages were eventually dropped but said she was fearful during the entire encounter.

“To be honest, I was terrified; it was just him and I in the lobby,” she told Newsweek. “When he made the comment to ‘leave, it’s better for you,’ it felt like a threat, and I was scared what might happen.”