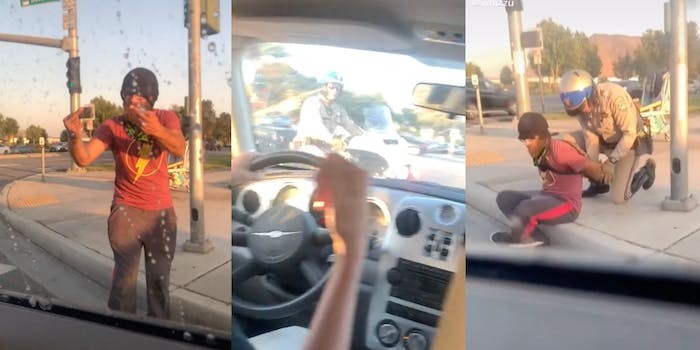 ‘What happened to make him do this though’: Viral TikTok shows homeless man arrested after kicking, throwing a drink at car (updated)

Not everyone is convinced that the attack came out of nowhere.

A viral TikTok showing a homeless man throwing a drink and kicking a car, then subsequently being arrested, has sparked debate over whether the original posters incited the incident.

The video, uploaded by user @whizzu, has garnered over 41 million views on TikTok in a single day. It has also made its way to Reddit where it’s been shared tens of thousands of times on various subreddits.

The man can be seen throwing a to-go drink at a car while the passengers inside record him. He then flips the passengers off, kicks the car, and puts his hands over his mouth to feign shock. A police officer on a motorcycle almost immediately pulls up, with some viewers calling it “instant karma.”

However, not everyone is convinced that the attack came out of nowhere, with some commenters pointing out the passengers’ laughter throughout the video.

“What happened to make him do this though cus I feel like y’all made him act this way for a reason…” one user said.

“He’s homeless… you shouldn’t be laughing,” another wrote.

“The fact that they’re laughing makes it seem like they were provoking that action,” one comment read.

Others believed that the man should not have attacked their car, regardless of what transpired beforehand.

“I mean, keep your hands to yourself?” a user wrote in response to another person asking what the passengers did to the man.

“It doesn’t matter if they are laughing,” one person said. “So people handle stress differently. What he did was inexcusable, period.

In a comment under the video, @whizzu claimed that “this man is not innocent whatsoever.” They also posted a follow-up video showing what transpired after the cop arrived. The caption reads “the outcome when you don’t give a homeless man money,” implying that the passengers’ refusal to give the man money set him off.

The second video shows the cop handcuffing the homeless man as he sits on the street curb. He says “thanks a lot” to the passenger and apparently calls them an “easy target.” @whizzu then writes “*officer babying him*” in the overlay of the video, as the officer and homeless man agree that the man is being compliant.

“I apologize, I don’t know how I can repay you,” the homeless man says in the video. “I’m a landscaper. You probably don’t trust me, but that’s the only way I can pay for your door.” He confirms he is homeless at the end of the video.

The follow-up brought more questions than answers for some viewers wondering what happened before the original video was filmed.

“If he didn’t have a way to pay for the door why kick it in the first place??” one person questioned.

“Why don’t you post the full story so we know why he did what he did???” another asked.

It’s unclear if the man has been charged. Various comments have pointed to the incident occurring in Fontana, California, so the Daily Dot has reached out to the Fontana Police Department.

Update 5:22pm CT June 22: In a statement to the Daily Dot, @whizzu gave the following account of the incident:

“We were stopped at a red light and I simply nodded no,” @whizzu wrote. “[He] proceeded to ask until he saw I wasn’t giving him attention. He threw the drink and we laughed out of nervousness and shock. Once he kicked [the car], in a flash, the [California Highway Patrol] was right across the street and caught him in 4K. He was then arrested for vandalism.”

@whizzu also said that the car has a big dent that will cost over $1,000 to repair.