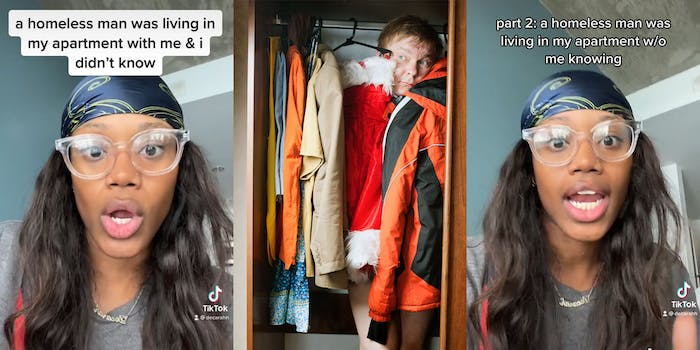 ‘He’s ur roommate now’: Woman says a homeless man was living in her apartment without her knowledge

'Not you leaving your doors unlocked.'

A woman on TikTok says a homeless man was living in her apartment in Tucson, Arizona for a day without her knowledge or consent.

The TikToker (@decarahh) shared a now viral video that detailed how she discovered the man living in her apartment. As of Sunday, the video received about 357,000 views.

The morning of the incident, the TikToker checked her emails and saw an email from her apartment’s management saying a homeless man was roaming the building. They were trying to locate the man and had police on the way, she says.

“No shock. This has happened before,” she says in the video. “We supposedly live in these ‘luxury apartments,’ but these homeless people don’t give a fuck in Tucson.”

The woman says she went to the gym later that day and left her apartment door unlocked. She says it became a habit for her to leave the door unlocked because she lives with three roommates and they’re usually at home.

Several hours after she got home from the gym and finished working for the day, the TikToker checked her email again. Another email from her apartment’s management said the homeless man had never been found.

At that point, the TikToker realized she hadn’t locked her door when she left earlier that day, she says. She decided to check each of the four bedrooms and four bathrooms in the apartment.

The first bathroom she checked was empty, but the first bedroom was locked, the creator says. But her roommates weren’t home. The woman says she “about shat her pants” but then went to sit in the living room.

In a second TikTok video, the woman says she heard a man snoring in the locked bedroom as she sat in the living room trying to figure out what to do.

Eventually, she heard the bedroom’s door knob jiggling, and she felt “paralyzed” with fear. She began texting her friends for help, and her friend who lives next door told her to leave the apartment.

The woman said before she left the apartment she said loudly, “Hey, if there’s anybody in here, I’m literally leaving for five minutes. Just please leave.”

Then she went downstairs to the lobby to wait for her friend, who showed up about two minutes later. Together, the two headed back to the apartment, the woman says. Before they could enter the elevator to go upstairs, the homeless man stepped out of the elevator.

“It’s like ‘our’ homeless man,” the woman says in the video. “I call him ‘our’ because he’s ours. He’s like literally always around this fucking building all the time, and he also chased my roommate in our garage the other day.”

The TikToker says she has another three months on her lease at the apartment, but her parents are forcing her to move out immediately. She says she knows she should leave, but she doesn’t want to “let the homeless win.”

“I sound like a fucking Conservative white man,” she says in the video. “I literally can’t stand homeless people right now. I’m so upset.”

In a comment on her first video, the TikToker clarified that she did call the police when she realized the man was in her apartment. She says she didn’t call her apartment’s management because they close after 5pm, and the building has no security guards.

Multiple viewers called the TikToker out for leaving her door unlocked.

“U get that email and still leave your door unlocked after lol,” another viewer said.

A third viewer wrote, “Oh not you leaving your doors unlocked😭 neverrrrr never!!!”

Other users joked that the homeless man didn’t seem to be homeless anymore.

“He sounds like he has a home to me,” one user said.

“He ain’t homeless he’s ur roommate now,” another viewer commented on the second video.

A third person, who appears to be one of the TikTokers roommates, said, “damn… he better help me pay rent.”

The Daily Dot reached out to user @decarahh via TikTok comment.