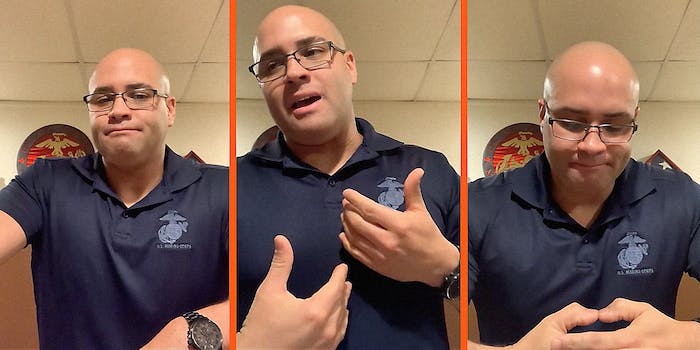 'I stand behind the video and what I said in it.'

A police officer says he’s on paid administrative leave for refusing to take down the 43-minute video that alleges corruption within the police department in Holyoke, Massachusetts.

Rafael Roca, a former U.S. Marine who was hired into the Holyoke police in 2016, posted the video on Sunday accusing the department of broad corruption, saying malfeasance had taken place for “as long as anyone could remember.”

He calls outgoing Police Chief Manny Febo “corrupt,” contending minorities are routinely passed over for upper-tier assignments and disciplined at higher rates. He also alleged gross negligence by Febo and his “favorites.”

Roca also suggests the state attorney general or the FBI should look into his claims against Febo and the department.

“Yeah, they didn’t waste any time. They took my gun and my badge and kicked me out of the email system,” Roca said on Monday, according to MassLive. “I’ll probably lose my job, but I’m good. I stand behind the video and what I said in it.”

Per MassLive, Febo, who will retire in July, said in a statement that the department is “aware of the video” and described it as a “personnel matter.” “I stand by the integrity of the men and women of the Holyoke Police Department, and I welcome any outside agency that would like to look into any of the alleged allegations from the video,” the statement said.

MassLive reports that the FBI didn’t say whether there were plans to investigate the allegations in Roca’s video. However, the FBI and the attorney general have previously investigated unrelated criminal cases involving the city’s police officers.

Roca told MassLive that a Holyoke police captain called him to relay a message from Febo.

“He said: ‘The chief saw your video, and he’s ordering you to take it down,'” Roca said. “I said I’m sorry, but, respectfully, I refuse to take it down.”

Roca, who says he’s been labeled a “bad cop” by others in the department, was ultimately suspended for violating its social media policy in denigrating its actions publicly.