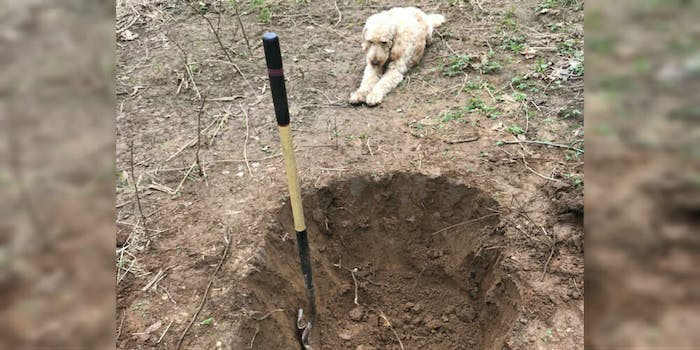 People are having a lot of feelings about this dog watching its owner dig its grave.

TV writer Franklin Hardy, best known for You’re the Worst, shook Twitter users to their cores on Wednesday when he shared a near-death experience suffered by his dad’s dog.

Apparently, Hardy’s dad was informed over the phone by his vet that the dog had to be put down. If you bring your animal into a clinic to be put down these days, it’ll usually be cremated, but the vet offered to come to their home, so Hardy’s dad began preparing a proper burial for his beloved pooch.

That’s all very sad and sweet, but it gets weird and awkward from here: Hardy’s dad let his dog watch the digging of its own grave. When the vet arrived, he checked out the old pup again and declared that it was a false alarm. The dog was fine.

The vet told my dad on the phone (??) that his dog had to be put down and he’d come to his house and do it. My dad dug the dog’s grave AND LET THE DOG WATCH. Then the vet came and checked the dog and said it was a false alarm. Oops! Dog’s fine! Everything about this is insane. pic.twitter.com/sFXKVDk5Vz

Yay, no dead dog! But people are still very uncomfortable about the existential horror they feel when imagining watching this scene unfold through the dog’s eyes.

Once the dog figures out what the hole was for: pic.twitter.com/Q108xvkIqU

Hardy’s dad said that the dog didn’t seem upset. “It didn’t seem to bother him,” he said. “Was a little hard on me, though.” If the dog didn’t know it was a grave, there’s a possibility it was having a good time. Some Twitter users thought the dog might have been excited to see its human getting in on the hole-digging game.

Dog:
TODAY WAS SO AWESOME WE DUG A BIG HOLE I DIDNT EVEN KNOW WE WERE BOTH INTO DIGGING HOLES WE HAVE SO MUCH IN COMMON

Dog probably thinking "Finally, a little help with the holes around here. About time the old man started pulling his weight."

I think the dog is thinking “wow, dad’s good at digging holes. I remember when I could dig holes like that. Ah, digging, I love the smell of the earth and the coolness of the soil”

Other folks were just confused about the decision to photograph this tragic and anxious moment.

Your dad: Take pictures of him looking into the grave. We’ll probably want to remember this.

The dog is recovering well from the scare, perhaps because it didn’t even realize a scare was happening. When Hardy asked how the dog is doing now, his dad replied “famously.” With 14K likes and counting, the dog indeed is.

Since people are asking, my dad says the dog is doing “famously.” Here he is: pic.twitter.com/Z0taA21YaL

(The Daily Dot reached out Hardy for comment and will update with his response.)