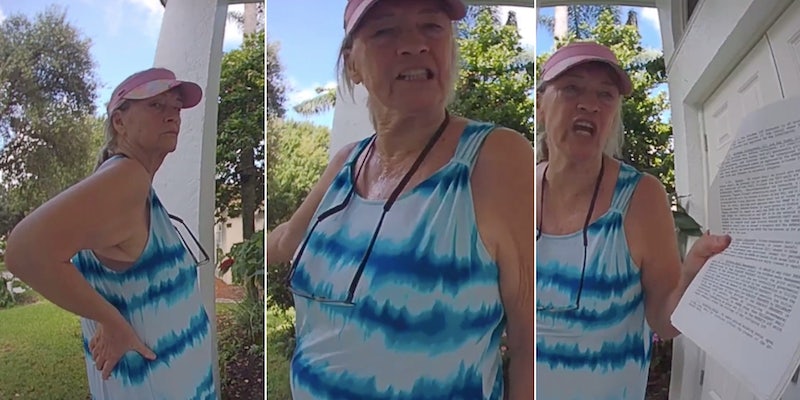 'If you don't take this Harris-Biden sh*t down, I will sue you.'

A Ring doorbell video captured on Sunday shows “HOA Karen” throwing a temper tantrum on her neighbor’s doorstep and threatening to sue her over the Biden-Harris sign in her front lawn.

The video was uploaded to the r/PublicFreakout subreddit on Monday morning and has already received nearly 10,000 upvotes at the time of this writing. It begins with HOA Karen—decked out in a blue tie-dye tank top, pink visor, and glasses hanging from a strap around her neck—glaring at her neighbor’s camera and jabbing the doorbell several times.

When the neighbor answers the bell and says she can’t come to the door, HOA Karen launches into her tirade.

“Get out your neighborhood bylaws,” HOA Karen demands as she whips out her own packet. “It’s section 5.20: ‘No signs shall be in the yard.’ If you don’t take this Harris-Biden shit down, I will sue you. I was gonna have you sell my house, but that’s not gonna happen now, and you’re gonna lose a lot of business because of this crap.”

Quivering and nearly overcome with rage, HOA Karen once again cites Section 5.20 of the neighborhood association bylaws before storming away from her neighbor’s house. Her neighbor then says, somewhat bemusedly, “Well, I got all that on film.”

HOA Karen was instantly met with jeers from hundreds of Redditors.

“She strings together her sentences with the efficiency of a broken washing machine motor full of molasses,” one user wrote.

Another commenter cut right to the irony of the situation: “Funny that it seems loads of Trump supporters are always screaming about their rights and freedom…. Yet they’d join an HOA… where you can’t even piss without permission.”