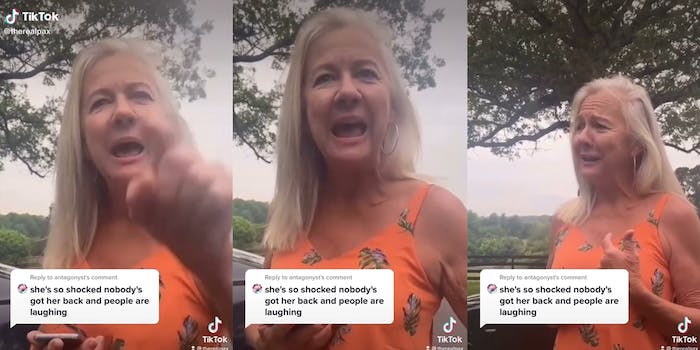 'I don't care where you live, honey.'

A viral TikTok video shows a woman dubbed “HOA Karen” cursing at a young woman, supposedly in a church parking lot, and evoked the homeowner’s association—and she gets no backup whatsoever.

The video was posted to TikTok by popular aggregator @therealpax, with the caption, “Karen in a church parking lot after a morning at church.” By Monday, the video had over 19,000 likes.

There’s no indication of how the argument began, but the woman points toward the unidentified person filming and says, “Fuck you.”

“I don’t care where you live, honey,” the Karen responds. “You don’t own this HOA [homeowner’s association].”

“Neither do you!” the person filming quips while the camera pans to a car parked halfway in a patch of grass.

“Actually, I do,” the so-called “Karen” says in a shocked tone.

“She just told me to eff off,” the person filming tells another person out of frame. The second unseen woman asks, “Why would you verbally abuse a girl?”

The “HOA Karen” appears to be in disbelief. “You know what? Verbally abuse a girl?”

“You’re verbally abusing her by cursing at her,” the woman says off-camera. “You’re harassing our family.”

There are many comments about the woman’s age and whether the argument really took place outside of a church. However, the fact that she’s arguing and cursing out someone, with some siding against her, verifies her Karenness.