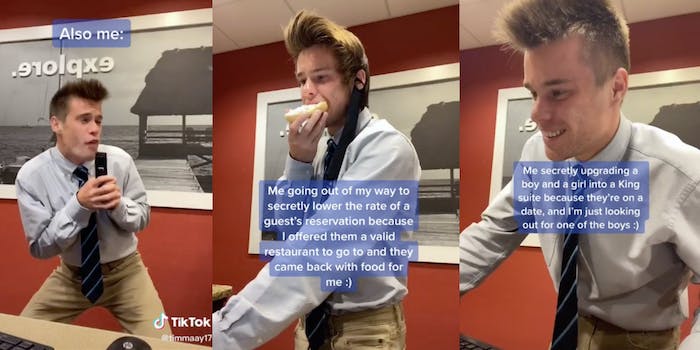 Tim Redman is known for making comedy videos about working in a Hilton hotel.

Update 9:47pm CT, Sept. 23: A Hilton spokesperson told the Daily Dot in a statement: “We believe the creator was not a Hilton employee, but a team member at an independently owned and operated hotel. Hilton has no control over the hiring and firing of these team members. That said, a number of the videos appear to mock hotel guests or show a disregard for privacy and safety. While hospitality people enjoy a good laugh, these topics are no laughing matter. We plan to contact the hotel and request additional information.”

A popular TikTok creator, who is known for making comedy videos about working in a Hilton hotel, says he was fired.

Tim Redman, @timmaay17, posted a video of himself crying to announce his termination. The video has garnered over 3 million views since its posting on Sunday. Text across the video explains he was fired via phone call after the company flagged one of his TikTok videos. In a comment on the video, Redman wrote he was terminated for “negatively representing the Hilton brand.”

Update 2:12pm CT, Sept. 24: When reached for comment, Redman told the Daily Dot that while he works at the Hampton, it is “owned by Indus which is owned by Hilton,” and Hilton is the entity that fired him.

“After working at a hotel for a year, I’ve been fired,” the text across his video reads. “Please guys… help me out. I have [one] last call to reinstate my termination. I love you guys, and I love my job even more. Please take me back Hilton. I didn’t mean to cause any harm.”

In a different video, he—possibly jokingly—calls on Paris Hilton, who’s famously the heiress of the hotel chain, to reach out to him. The text in the video read, “Paris Hilton, I want to know why you completely ignored the outrage from millions of people on my termination. You say that you care about your Hilton brand, yet can’t even reach out to [one] person on this matter. I tried so hard to reach out to Hilton, but every time I was treated like a menace to society.”

He concluded, “All I did was bring joy into people’s lives and it seems like Hilton doesn’t even care.”

In the comments, Redman clarified the video was for venting purposes and detailed why the hotel should not have fired him. “I made it very clear that everything was hypothetical and every TikTok was banter and for people to escape reality for just [five] seconds of their life,” he wrote.

“I have never smoked on property,” he continued. “I RARELY lower rates without reason, for the passed out drunk guy, I asked if I can post it when he was sober.”

Fans expressed dismay at the hotel’s alleged decision and are claiming to have canceled their reservations in support of Redman. “Just cancelled my reservation for this weekend at a Hilton hotel. Companies that treat their employees like this won’t have my business,” one user commented.

Another person said, “Just cancelled my reservation… Hilton not cool… Take him back.”

While Redman said in a comment that the hotel never told him which video was cause for his termination, fans are speculating about a few. Redman jokes about everything, from “putting a husband in an unlocked adjoining room with his cheating wife” to “secretly upgrading” guests, in his videos. “Me casually chilling at the front desk then all of a sudden I see a drunk college kid completely blacked out in the lobby…” he wrote in another, before posting a photo of said college kid. “NO LIKE REALLY.”

“Me going out of my way to secretly lower the rate of a guest’s reservation because I offered them a valid restaurant to go to and they came back with food for me,” Redman wrote in another video showing him eating a bagel.

“I think this is the TikTok they saw” and “The TikTok that ended it all,” users are now writing in the comments of those videos.

Redman later took viewers with him on his journey to find a new job within the hotel industry and is now saying he “got hired at another hotel.”

“Tbh I couldn’t care less (about the firing). I’ve moved on and already found another job that pays me more,” Redman told the Daily Dot.