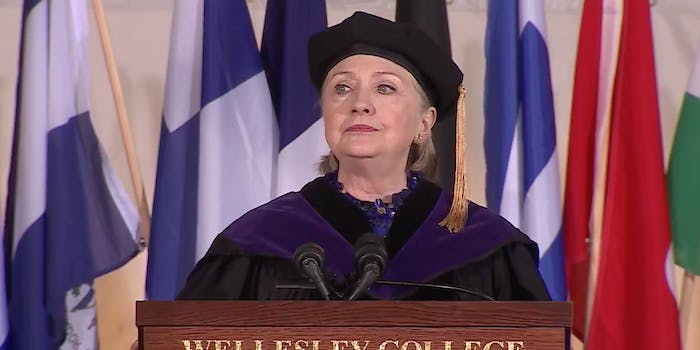 She also confirmed she's been coping like the rest of us—with Chardonnay.

Speaking at the commencement for the Wellesley College graduating class of 2017 on Friday, former Democratic Presidential candidate Hillary Clinton shared that organizing her closets and taking those long hikes in the woods helped her sort out her thoughts after losing the 2016 presidential election.

“I won’t lie—Chardonnay helped a little, too,” she joked.

Clinton echoed this lighthearted, witty but passionate attitude throughout her time speaking to the Wellesley graduates, the soon-to-be alumni of her own alma mater.

Her speech centered on encouragement to pursue aspirations, peppered with earnest reminders to stay politically active (“You don’t have to do everything, but don’t sit on the sidelines”). She even shared an emotional memory of herself as a Wellesley freshman, calling home to tell her parents she didn’t think she was smart enough to make it to graduation. While her father told her to come on home, her mother stopped her from turning around.

Even now, she’s found encouragement from people such as those in the room she spoke to—she shared that after the election, she felt most uplifted in meeting young people who told her that her defeat didn’t defeat them.

But while much of Clinton’s speech promoted positivity and the pursuit of justice, the former secretary of state used her time on stage to thoroughly criticize President Donald Trump and left no punch held, all without mentioning him by name.

Recalling her time at Wellesley, she spoke of the anger that students felt toward President Nixon, obviously drawing comparison between Trump and the disgraced president with her description: “A man whose presidency would eventually end in impeachment for obstruction of justice, after firing the person running the investigation into him at the Department of Justice.”

She warned the class of social media misinformation (even touching on the conspiracy theory Pizzagate) and pointed to alternative facts and inauguration crowd size disagreements, early fires in the Trump administration, saying, “When people in power invent their own facts and attack those who question them it can mark the beginning of an end to a free.” Though “trolls galore” may even be intimidated by Wellesley grads to the point of calling them “nasty women,” Clinton said, they must know that even if they feel powerless, their voice matters.

However, despite her abrasive words against the president, Clinton encouraged the graduates that through their learning and service, they should include people who they don’t agree with politically.

“I believe with all my head that the future of America—indeed, the future of the world—depends on brave … people like you insisting on truth and integrity every day,” Clinton said. “You didn’t create these circumstances, but you have the power to change them.”

You can watch the entire speech below.