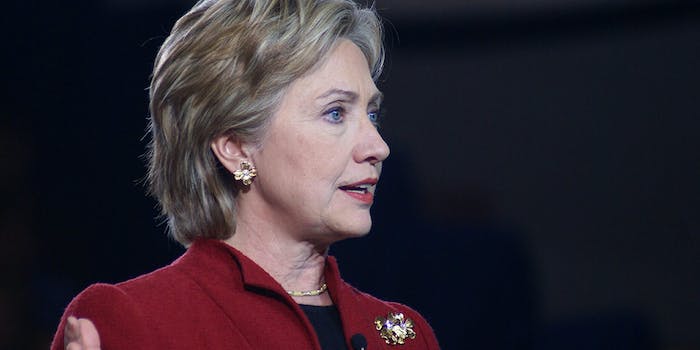 Civil-rights activist DeRay Mckesson has landed a meeting with another 2016 presidential candidate: the Democratic Party’s frontrunner.

Mckesson and other activists met privately last week with Sen. Bernie Sanders (I-Vt.), the insurgent challenger in the Democratic primary. The party’s leading candidate, former Secretary of State Hillary Clinton, is next on his list, following a Twitter exchange he had with Clinton’s campaign.

.@HillaryClinton, we look forward to the details of your criminal justice platform. Will you be available to meet before its release?

@deray: Let's meet; we want to hear from anyone ready to address this urgent problem and work toward solutions. Our team will follow up.

Thanks for the response. Looking forward to the conversation. ✊🏾. https://t.co/AyqyFk8v4E

In their meeting with Sanders last week, four members of We The Protesters, including Mckesson, discussed police violence, militarization, community empowerment, and the wage and wealth gaps between black and white Americans.

We The Protesters is a police-accountability group that created Mapping Police Violence, a collection of data on officer-involved shootings, and Campaign Zero, a data-informed effort to propose political solutions to police brutality.

“I think he indicated a willingness to learn and be pushed,” Samuel Sinyangwe, one of the activists at the Sanders meeting, told the Daily Dot last week. “We had candid and frank conversations. There were areas where he admitted he hadn’t been speaking out enough about a particular issue and that he would think more about how to do that.”

Sinyangwe recommended a Campaign Zero document comparing Sanders’ proposals to those that the campaign supports. The document also includes proposals from Clinton and the other major Democratic candidate, former Maryland Gov. Martin O’Malley.

“I think it’s important for candidates to listen to their constituents,” he said, adding that candidates need to propose solutions to issues directly affecting black people. “What is clear is that no candidate will win this election without the black vote.”

Clinton met with members of Black Lives Matter‘s Boston chapter on Aug. 11 in Keene, N.H. They discussed the effects of the drug war and mass incarceration on African Americans, and activists also brought up the issue of anti-blackness.

The activists weren’t happy with that response. One of them, Julius Jones, told Clinton, “I say this as respectfully as I can, but you don’t tell black people what we need to do. And we won’t tell you all what you need to do.”