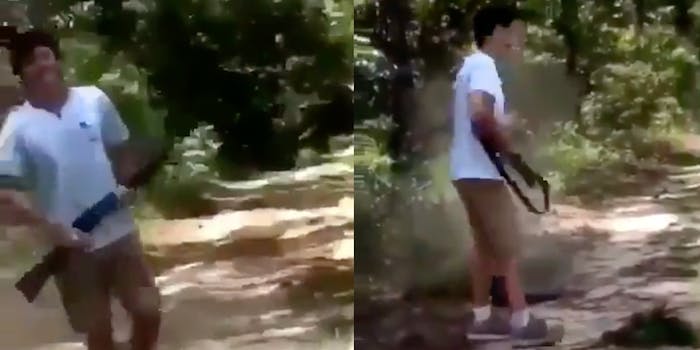 A teenager at a South Carolina Catholic school has reportedly been expelled and charged after videos emerged of him making threats against Black people while shooting rounds from different guns.

The 16-year-old boy, who repeatedly identifies himself as Parker in the two videos, sent out the clips to some of his classmates at Cardinal Newman in Columbia, South Carolina, according to the State.

In two separate videos, now spreading on social media, the teen is seen shooting rounds from rifles at a box that he says represents Black people.

“Howdy I’m Parker [inaudible], and I hate Black people,” he says. “You notice over there is a box of Jordans? The favorite pair of shoes for a Black man. I’m gonna show you what I think of a Black man.”

He then fires shots at the box, turns back at the camera, and says, “Fuck all [N-word].”

In a second video, he reintroduces himself before repeating his actions.

“Hey it’s me again Parker [inaudible], hater of all Black men,” he says, “What have we here?” The video, seemingly shot from a phone camera, moves to show two black boxes on the ground.

“It seems that our [N-word] hasn’t quite learned a lesson here,” he says. “It seems like he needs 25 rounds.”

He shoots some more at the black boxes, turns around and says, “I don’t think that was a gun.”

He picks up another gun and shoots another round. “Thank you very much for watching my PSA, fuck all [N-word],” he says before the video ends.

He also made threats to shoot up the school during the break, according to the Associated Press, and he was arrested and charged with making threats to the school.

The videos were reportedly recorded in May, but the school did not take any action until after the State approached it for comments while reporting on the videos in July. The principal of the school sent a letter to the parents on Friday saying the teen had been expelled and there were no further threats to the school.

South Carolina politician Annabelle Robertson shared the videos to Twitter, but they have since been removed. The videos have been re-uploaded by various users to Instagram and Twitter.