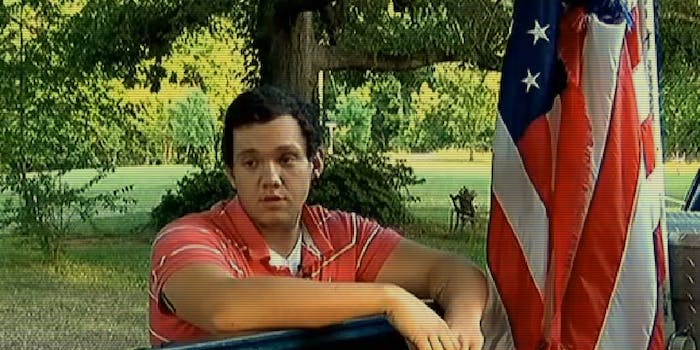 Peyton Robinson wouldn't take no for an answer.

Peyton Robinson is a flag-tivist. He wants to fly the American flag from the back of his pickup truck, but his high school won’t let him.

The 18-year-old resident of York County, S.C., has a number of family members in the military, so he put an American flag and a POW flag in the bed of his pickup truck to honor their service. When York County High School administrators cited complaints about the flags that billowed from his truck as he drove, Robinson didn’t see the problem.

Administrators said there was a safety issue with the flags. This is what it looks like while Robinson is driving.

Robinson was incensed at the request to take down his flags.

“I’d understand if it were the Confederate flag or something,” he told WISTV News. “That might offend somebody. I wouldn’t do that. But the American flag? That’s our country’s flag.”

Apparently, one administrator even attempted to remove the flags from Robinson’s truck while he was in class. The high school senior was furious about it—and he was far from alone.

Robinson drew support from veterans’ groups and classmates after posting about the incident on Facebook. They rallied around him Thursday morning in a demonstration against school administrators, with students affixing huge American flags to their own cars in solidarity.

Eventually, the school decided to change its attitude toward flags on student cars—not because they were overcommitting to a rule and looking foolish, but because of the students’ “outstanding display of patriotism through peaceful demonstration.”

Let them spin it however they like. The flags will twirl patriotically in the wind either way.

Though he doesn’t fly a Confederate flag from his truck, Robinson has written a Facebook post about his support for such a flag.