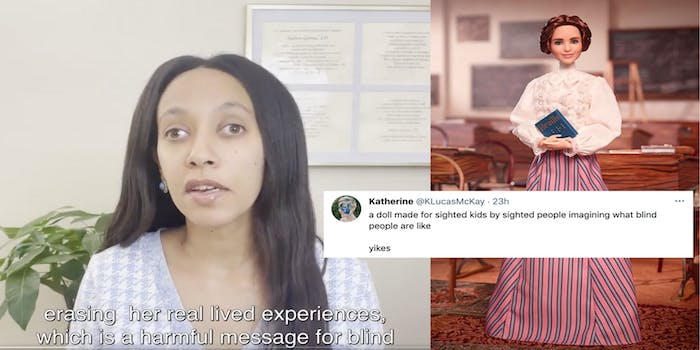 Mattel, the manufacturer of Barbie, released its Helen Keller doll on Tuesday as a part of its Inspiring Women series. But advocates say Barbie’s Helen Keller doll has symmetrical eyes that don’t accurately represent Keller’s disability.

“A doll made for sighted kids by sighted people imagining what blind people are like,” one user commented. “Yikes.”

Keller, who became blind and deaf at nine-months-old due to an illness, was a disability rights advocate. When she was approximately 30 years old, her eyes were removed and replaced with glass prostheses. Keller had unilateral proptosis, which is the protrusion of one eye, resulting in asymmetrical looking eyes. She was often photographed from the side to hide the asymmetry.

The Helen Keller doll, however, has perfectly symmetrical eyes. People online said the doll is not a proper representation of Keller and sends a harmful message about how people view disabilities. The doll’s release came days before Global Accessibility Awareness Day on Thursday, which focuses on how to create more digital accessibility and inclusion for people with different disabilities.

“It’s similar to how Frida Kahlo’s wheelchair or even her gait is often left out in art and conversations, even when Barbie made Frida a doll!” one user commented. “It all sends a message of what parts of disability are ‘acceptable’ to look at.”

In a press release, the designer of the Helen Keller doll, Carlyle Nuera, said she wanted to design a doll that respected and elevated a person like Keller.

“Because of her achievement as the first deafblind person to earn a Bachelor of Arts degree, I wanted to capture that time in her life, imagining what she might have looked like and worn as a student at Radcliffe College in the very early 1900s,” Nuera said.

The doll’s clothing and facial structure is based on photos of Keller when she was a young woman in the Edwardian period.

Lisa McKnight, Mattel’s senior vice president and global general manager of Barbies, said in a statement that the company was excited to bring the disability rights advocate to the collection.

“Representation comes in all forms and we recognize that the blind and low vision community is often overlooked, with their stories going untold,” McKnight said. “We hope that by introducing children to Helen Keller’s story of perseverance and determination, they will be inspired to dream bigger than ever before.”

Despite the doll’s goal of highlighting the work and achievements of Keller as an author, educator and advocate, people online said the doll was harmful to blind kids and adults.

Haben Girma, a human rights lawyer and deafblind woman with asymmetrical eyes herself, said she was teased for her eyes when she was younger and has been told by adults to hide her eyes behind dark glasses.

“It’s frustrating and disappointing that this new Barbie doll erases that part of Helen Keller’s experiences,” Girma said in a video she posted on Twitter.

“It sounds like it’s a doll for sighted girls,” Girma said. “I’m really disappointed with this, and I wish blind kids had access to more toys and dolls that actually represent our real experiences.”

“So many of us hide or change ourselves for ‘perfect’ eyes,” one user commented. “If I had a doll with eyes like mine as a child, it would have made such a huge difference.”

Mattel did not immediately respond to the Daily Dot’s request for comment.