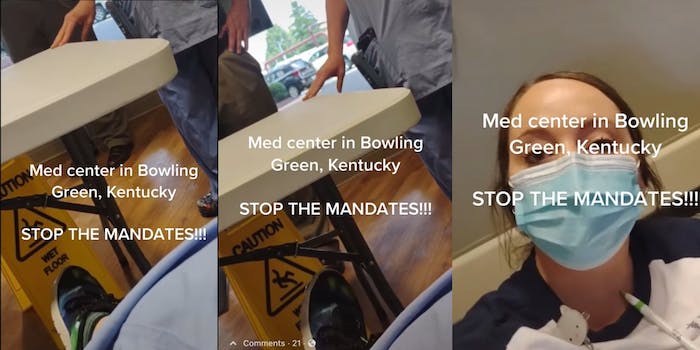 ‘We need your badge, and you need to leave’: Karen refuses to leave the workplace after getting fired for refusing vaccine

‘So you do not work here anymore,' she is reminded after showing up for work.

A video of a healthcare worker refusing to leave her former workplace after being asked to do so for refusing the COVID-19 vaccine has gone viral, making the jump from TikTok to the r/ByeByeJob subreddit.

The video was initially posted by TikTok user @journeyintruth. While the video garnered 1.5 million views, the poster has since disabled comments. However, the video eventually made its way to Reddit, where the discourse is thriving.

Text overlay on the clip alleges the incident happened at a medical center in Kentucky, which is reportedly an at-will state, meaning that an employer has the right to terminate an employee without just cause.

In the video, the woman appears to be wearing scrubs and is sitting in a chair when she is approached by two employees. The individuals question her presence at the workplace and ask if she is trying to get “logged on to the computer, or?”

“I was gonna—here to pick up some chips and stuff, and I just stopped to talk to her,” she says.

One of the workers, also wearing scrubs, says, “So you do not work here anymore.”

She implies that they’ve “had this conversation before” and says the woman spoke with human resources the day prior.

“I did not quit, and I was not fired,” the woman replies. “There’s only two options. I have not been fired; I did not receive a termination letter.”

“You’re going to have to leave. We need your badge, and you need to leave,” the employee tells her.

The woman simply says “no,” before asking, “On what grounds?”

The employee tells her that they “do not want this to get ugly” and tells the woman to “do the right thing” by leaving.

The woman continues to refuse.

A male employee, who later identifies himself as the director of security, can be heard calling in for additional support before asking the woman for her name and if she got the vaccine.

“No, sir. And I was not terminated, and I didn’t quit,” she says. She also accuses the workplace of taking away her “choice.”

The director of security tells the woman that she made her choice and demands her badge. She continues to argue with him.

A followup video shows another male employee telling the woman and another worker, who seemingly also didn’t get the vaccine, that their access has been denied. He answers “yes you are” when they ask if they’ve been terminated. “You are being terminated,” he reiterates.

Comments were turned off on both videos, but once the first made its way to Reddit, the criticism against the woman poured in.

The Daily Dot has reached out to the video’s poster, @journeyintruth, on TikTok.