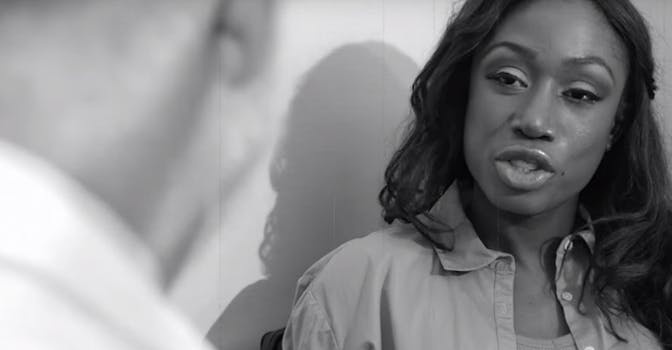 It's a health class video like you've never seen before.

Remember those outdated, scratchy instructional health videos from middle school? Perhaps the sex ed videos stuck in your mind due to the excrutiating awkwardness and seat-shifting they usually caused?

Chances are, not one of those videos featured a transgender woman of color visiting a doctor’s office for the first time—let alone one encountering an obstacle course of inappropriate behavior at the hands of the medical staff. Yet that is the everyday reality for many trans people.

On Thursday, the National LGBT Cancer Network released an eight-minute short film called Vanessa Goes to the Doctor. Originally made for the organization’s in-house cultural competency training program for healthcare workers, executive director Liz Margolies decided to release the video publicly because its message is so direly needed.

“This video can have a life of its own and there is nothing like it out there,” Margolies told the Daily Dot via phone on Friday morning. “It uses humor and the 1950s instructional video style to give a little removal—so providers can see what they are doing wrong without being shamed. Because shaming always freezes people.”

In the video, a black trans woman named Vanessa (played by Tiffany Mattheiu) goes to visit a doctor she’s never seen before. From the start, the clinic is an unwelcoming and subtly hostile environment for a transgender patient. Vanessa is put off before she even gets into the consultation room, where the doctor tells her that he can’t treat “patients like you” and recommends she see an endocrinologist even though she came in for a cough.

The negative experience depicted in the video echoes a recent Twitter campaign called #transhealthfail. In July, the founders of a new Yelp-style healthcare app, My Trans Health, asked the trans community to tweet about their experiences with medical professionals. It set off a viral reaction, with trans people flooding the social media platform with negative stories that continue to this day.

Told the doctor that I'm trans and he froze for a solid minute. Worst part about being trans is dealing with doctors #transhealthfail

GP looks at my records. "Are you transgender?"
"Yes"
"So you've had all the Surgeries?"
"…I'm here bc I have the flu." #TransHealthFail

No my cough isn't caused by my "medication". Does estrogen give YOU asthma? It might not be trendy anymore but it's still a #transhealthfail

Dear Toronto Drs: Me being a trans man does not give you the right to refer to me with female pronouns. STOP! #transhealthfail #transphobia

In August, World Professional Association for Transgender Health (WPATH) president Jamison Green told the Daily Dot that there is not a single medical school in the U.S. that offers a full course of study on LGBT health. It’s not something a future doctor can specialize in—and most existing courses are one-off electives taught by students.

Margolies agreed, adding, “The average medical school curriculum has less than five hours of LGBT-focused information and most of that is HIV-centered.” While education about HIV is vital, that singular focus hardly prepares medical providers for other aspects of LGBT health—such as learn ing not to ask transgender women when their last period was (the answer: uh, never).

According to Margolies, the power of Vanessa Goes to the Doctor is the way it shows the entire process of a visit to the doctor’s office, particularly the professionals’ bedside manner. “You could have the best trained doctor in the world, but the healthcare experience is soured before you get in to see the doctor,” Margolies said. “Think of the emergency room: you go past the security guard, the triage nurse, and so many people before you even get to see a doctor. For a trans person, they can have a terrible experience with the security guard or while filling out the insurance forms.”

According to a historic, sweeping study of transgender discrimination conducted in 2011 by the Task Force and the National Center for Transgender Equality, the numbers on trans health care are bleak: 19 percent of study respondents said that doctors had flat-out refused to treat them because they were trans. Additionally, 50 percent of trans people recalled having to educate their own doctors about their healthcare needs, and 28 percent overall eventually gave up, saying they had begun to avoid healthcare altogether due to rampant discrimination.

As a result, cultural competency training is on the rise. Margolies’ organization received funding from the New York State Department of Health for a series of five videos like Vanessa Goes to the Doctor.

But while the trend towards educating health workers is clearly filling a desperate need, Margolies was concerned about the quality and inconsistency of the emerging trainings, too. “There’s an increasing interest across the country in LGBT competency training,” said Margolies. “But there’s no standard of what constitutes such competency and there’s no evaluation for whether it’s working.”

There are some ways to evaluate change at the individual doctor level, she continued, such as surveying the healthcare professionals who take trainings for “changes in changes in knowledge, attitude, and behavioral intention.” But there hasn’t been sufficient research on whether the overall state of LGBT healthcare is improving: there’s still no way to measure whether transgender patients, for example, are finding doctor’s offices more welcoming and informative.

It’s not just trans people who are suffering from a lack of cultural competency and education on behalf of doctors. According to an October poll conducted by Grindr in conjunction with the Center for Disease Control and other groups, a staggering 90 percent of gay and bisexual men have never been told about PrEP drugs like Truvada while at the doctor’s office. That’s shocking, considering they are the highest risk group for HIV, and PrEP has been shown to prevent HIV transmission at rates of over 99 percent.

Lack of education and cultural competency is a primary reason for failures in LGBT healthcare, but sometimes everyday discrimination can also become a barrier to healthcare access. In a fundraising email sent out this December by New York’s LGBT community center, Matthieu, the actress who plays Vanessa in the video, described her own past struggles and their impact on her health.

“I told my family [that she was transgender] when I was 18; they were devastated and asked me to leave home,” Matthieu wrote. “For 10 years, I was homeless and had to get my hormones on the streets. Every night I had to try to make enough money to live off of, and hoped to stay safe from harassment and violence.”

Eventually, Matthieu wrote, the staff at the community center helped her get health insurance and “find a doctor who could prescribe safe and affordable hormones.”

Now, let’s hope, that doctor also knows what to do about a cough.