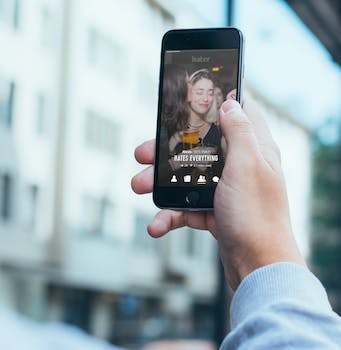 I tried Hater, the Cards Against Humanity of dating apps

By sharing hatred for the same things, can you go deeper with your matches?

Last week came the release of Hater, an app that matches you up with people based on a mutual hate for things. “Meet someone who hates the same stuff,” the app’s website states, as different subjects and topics ranging from Donald Trump to Slow Walkers are displayed.

Hater has understandably gained a lot of attention for offering a refreshing take on the dating app game. So, I decided to try it out, not just to get a better understanding of how it works, but to also find someone to spend Valentine’s Day with. After all, we’re arguably on course to the destruction of the human race, so why not hopefully find someone to spend our remaining days with, based upon our shared hatred of shit?

8:00pm: I was under the impression that you get to write in whatever you hated on Hater. However, that’s not the case. Instead, you are given a curated list of topics that include everything from Adam Sandler to Selfie Sticks. From there, you place those topics into one of the four following categories: dislikes, likes, loves and, of course, hates. This is surely a much more controlled and sensible method instead of allowing users to put in their own topics, because I was prepared to put some very specific responses (examples: people that aren’t down with punching nazis, and people that prefer In-N-Out Burger to Whataburger). 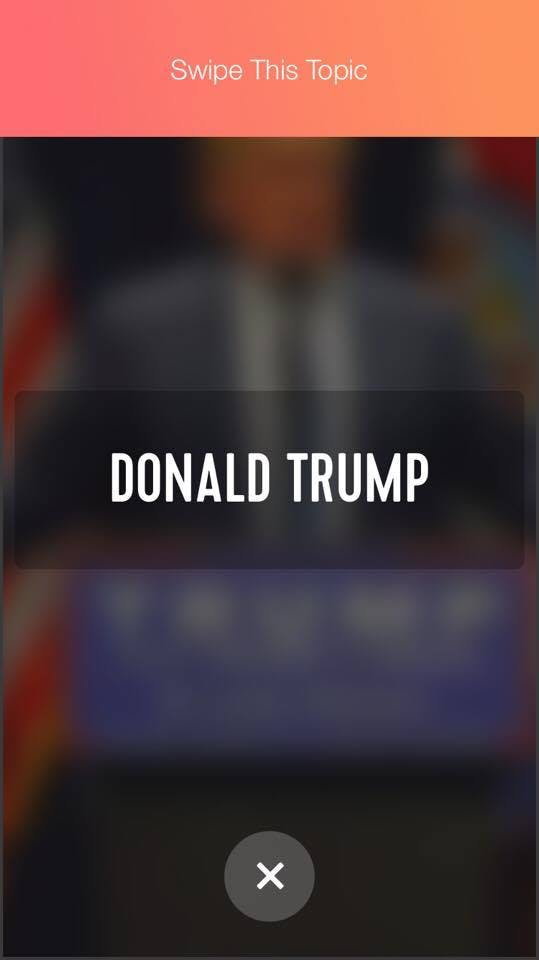 8:15pm: This is the first time I’ve ever used a dating app, and I’m glad it’s Hater. There’s something obviously amusing about trying to find a potential interest through our mutual hatred of someone or something. Ideally, I’d like for this mutual hatred to blossom into an everlasting and true love, but I’m trying not to get too ahead myself. A real love built on hate takes time after all.

10:00pm: Since it’s a curated list, it’s interesting to see who or what people hate. Within the nine profiles I’ve scrolled through, many of them included the following in their top five list: “All Lives Matter,” Stop & Frisk, and Butt Selfies. So far, everyone is politically minded but not too fond of ass display.

11:00pm: Dating apps are weird, dude. I mean, it’s basically IRL but URL—potential interests in the palm of your hand, where you can quickly dismiss or choose whoever you want on sight. There’s definitely a feeling of power to it all, as well as accessibility. But the issue of instant gratification adds another layer of anxiety to the already anxiety-inducing activity that is trying to find a partner.

There is, however, a benefit to dating apps, in the sense that you don’t need to go anywhere to initiate conversation. Plus, what separates Hater from its counterparts is this idea of ethical accord with its topics—that a shared hate can actually speak to a larger, systemic problem occurring within the United States. Yes, some of the responses are playful, but the inclusion of topics such as those mentioned before, as well as Abortion, Patriarchy, and Prostitution, are important. 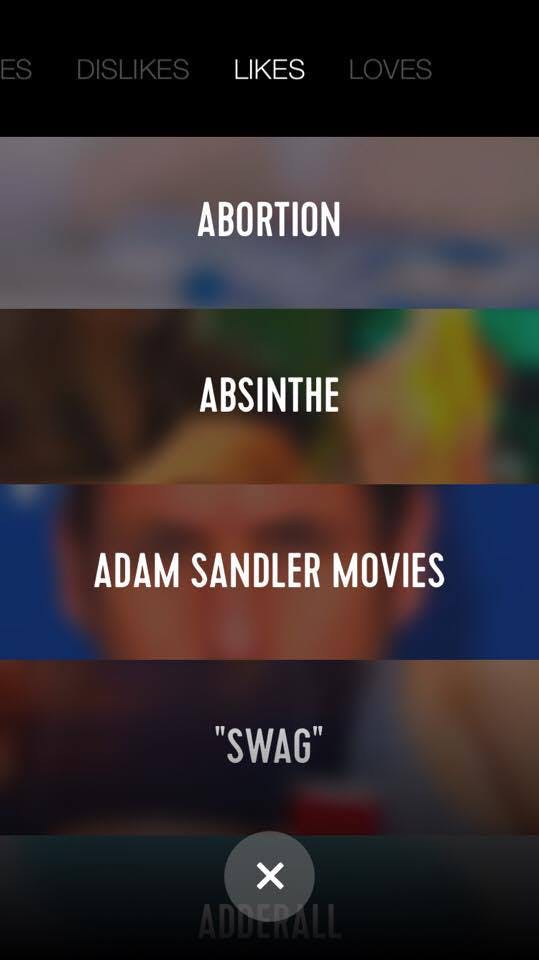 9:00am: My morning ritual now includes checking Hater as soon as I wake up and still, nothing. I’m not surprised. Like any dating app, a crucial part of Hater is having a sample of pictures to offer people viewing your profile, and I only have one uploaded that doesn’t even fully show my face.

11:00am: Sixty percent of users on Hater hate Insane Clown Posse. I could use this moment as a means of providing commentary on the ways in which ICP and its community of Juggalos are misrepresented (their fanbase is classified as a gang by the FBI, which jeopardizes the livelihood of civil and decent Juggalos), and how they’ll be marching on Washington, D.C., to show that they are a collective of fellowship and unity. But instead, I’ll say this: I wish there was a Juggalos dating app called Juggalo(ve)s. 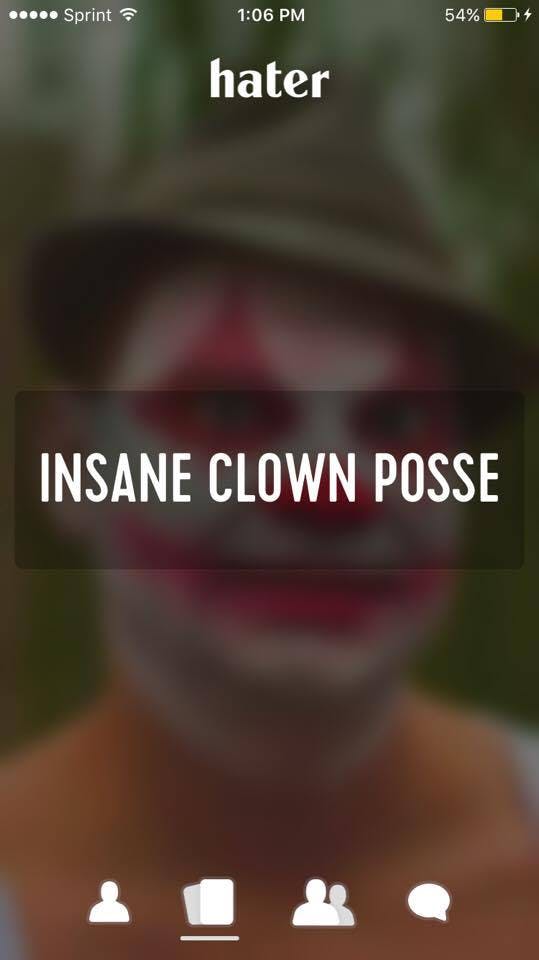 4:00pm: After looking at the percentages of the topic of Guns (53 percent of users hate them), I begin to realize why no one has matched with me yet. In my sole profile picture, I’m posing with an AR-15. I decide to add two more, both of which once again don’t show my full face. I’m obviously taking this seriously. 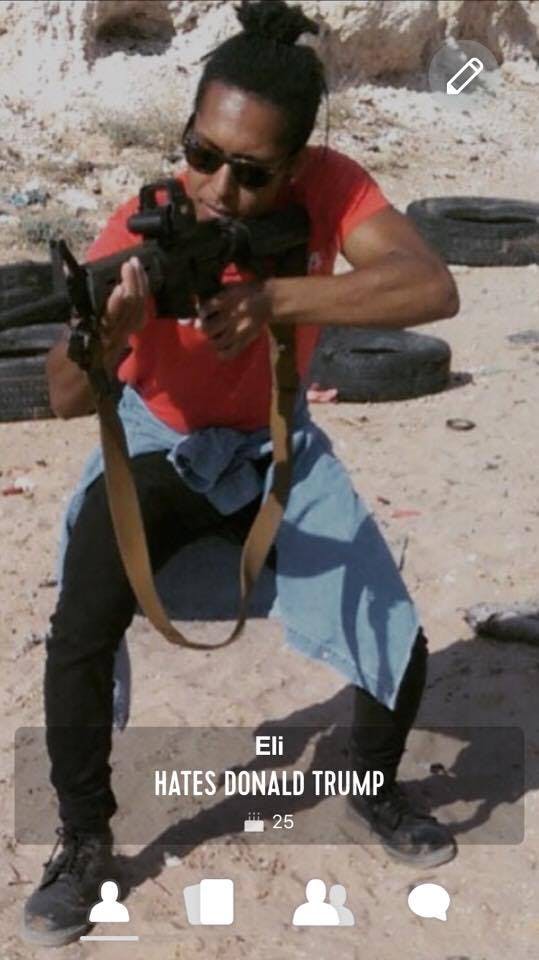 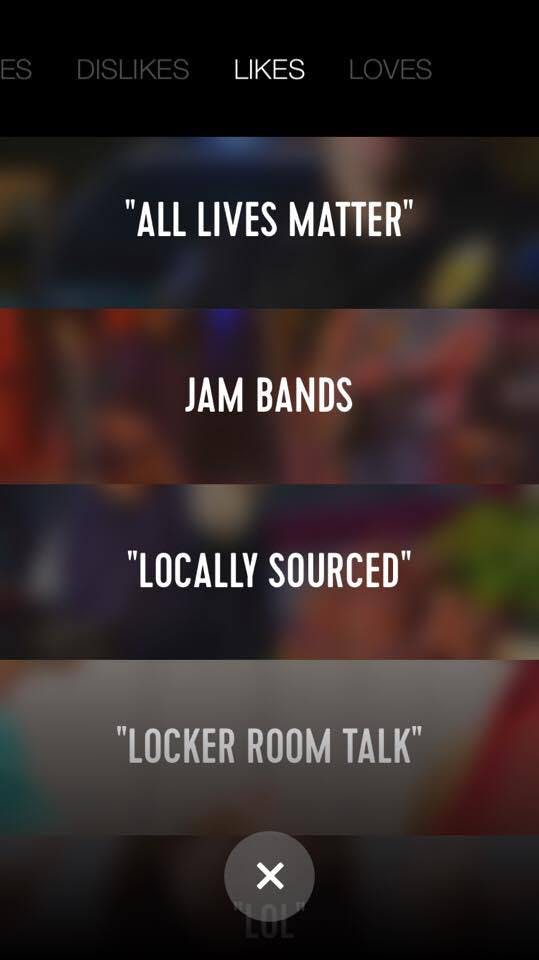 8:00pm: My friend takes over my account to try and make a possible match, but is making selections based on her own preferences. She then decides to make a Hater account just to see how quickly she can match up with someone. Thirty minutes later and she already has three. I’m going to grow old alone with no one to share my hatred with.

11:00pm: As what often happens when I drink wine, I tend to think deep. At a time when people are arguably as divided as they’ve ever been, is an app such as Hater necessary? Sure, studies have shown that sharing a negative attitude about someone or something can build a closeness between people. But seeing so many of these topics generalized and responses one-dimensional understates just how complex they truly are. For example, as pro-choice as I am, it’s discomforting to say that I love or even like abortion.

But it’s also this that makes Hater interesting: It throws topics into the mix that aren’t normally a part of an initial conversation starter. Ideally, hating “All Lives Matter” and Build the Wall would incite insightful conversations by those that do match up and could take these topics further. But that’s obviously something beyond the app’s control.

7:30pm: Finally, I’ve gotten a fucking match. This is where Hater takes on a “Cards Against Humanity” approach to initiating conversation. In the private messages, you can send cards that display different statements such as “I could totally beat ________ in a wrestling match,” or “I love you like Kanye loves ________.” You can choose your own response or write-in your own, which is where I see Hater becoming problematic. 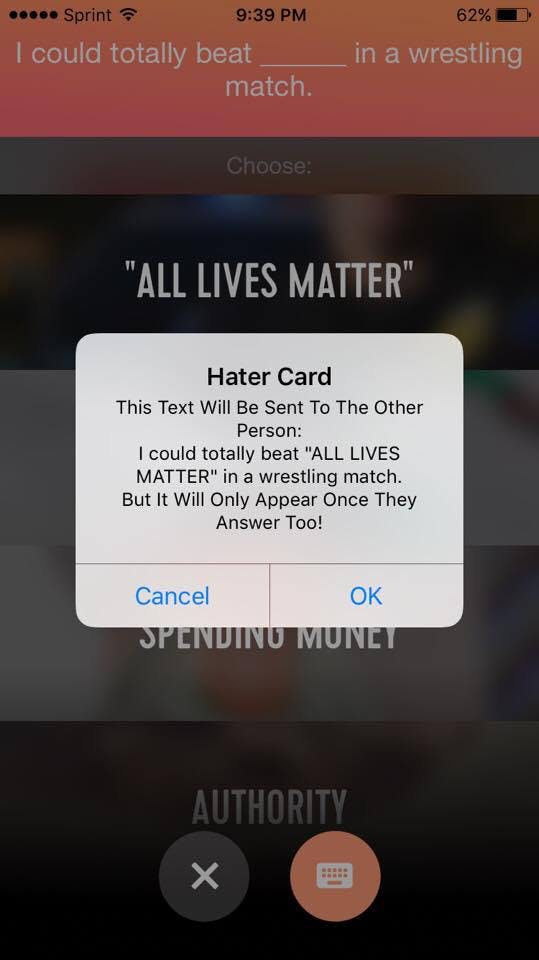 Up until this point, the app has curated and controlled my responses, but here, you can put in anything you want. One statement that came up was “White people hate ________.” Maybe it’s just immersing myself day in and day out on the internet, but I immediately envisioned the most offensive and trollish responses that someone might type. Yes, it’s cynical to think that way. But in a time where we have “alt-right” affiliates who propose “peaceful ethnic cleansing,” and have incited arguably one of the worst cases of harassment against a black person on a social media platform, it’s understandable. But alas, this is what comes with applying hate to topics that need to be unpacked because they’re complicated. 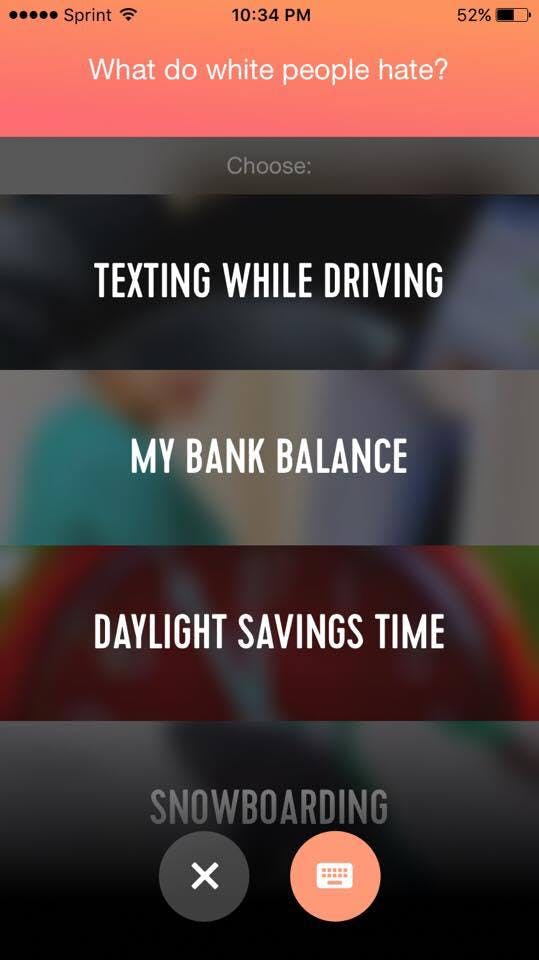 4:00pm: I initially started this in hopes of having a Valentine’s Day date, but now I’m no longer interested (or this is just me trying to ignore the fact that my match said she already had V-Day plans). However, she is interested in talking about our shared hatred of Donald Trump, which will hopefully be promising. Until then, I’ll wallow in my nearby bar’s two-for-one special, while reading Pablo Neruda poems to myself.

Overall, Hater is an entertaining dating app. However, I do feel that for the more morally complex topics (as well as the freedom that users gain upon being matched up), the app’s lighthearted approach loses its appeal, which is something the creators might want to work on for the future.