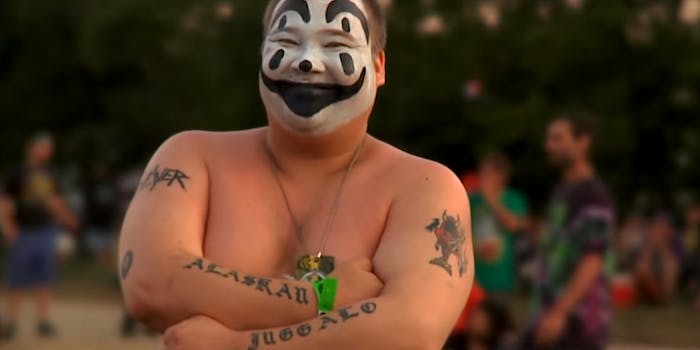 Screengrab via The Documentary Network

The Detroit-based horror-rap group Insane Clown Posse plans to take on Washington next year—and they want the Juggalos right beside them.

At the 17th annual Gathering of the Juggalos this weekend, frontman Violent J addressed the crowd to join them on their big protest against the FBI, planned for the weekend of Sept. 17, 2017—more than a year from now. The protest will start at the Lincoln Memorial and end at the Washington Monument.

ICP will hold a free concert in Bristow, Virginia, that weekend and a picnic for the fans after the protest.

“In 2017, the weekend of September 17, we need you,” ICP rapper Violent J said to the Juggalos in attendance, according to Detroit News. “We’re gonna do a [expletive] march on Washington. They call the Juggalo World a movement, right? Well, let’s move!”

ICP’s protest against the FBI is years in the making. The FBI classified Juggalos—ICP’s passionate, horror-inspired fans who may wear face paint, make “whoop, whoop” calls, and display gestures—as a “loosely organized hybrid gang” in 2011’s National Gang Threat Assessment, and ICP took issue with that. The group sued the U.S. Department of Justice and the FBI in 2014 for violating free speech rights, which was initially dismissed. The group later won a chance to appeal.

The protest is more than a year from now, and Violent J is worried that nobody will show up.

“We don’t know what’s going to happen,” he said. “We could totally embarrass ourselves, and there could be 25 people [who show up to protest].”