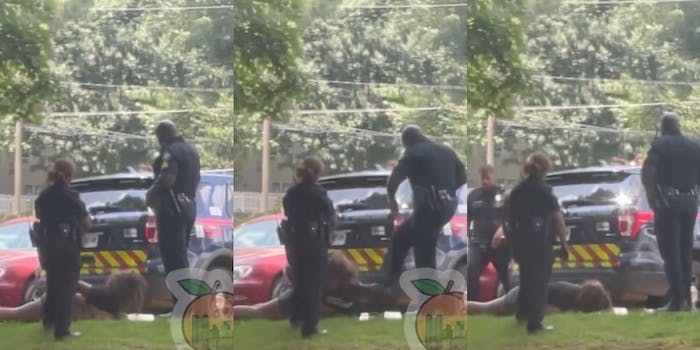 ‘I am totally horrified’: Video shows cop kicking handcuffed woman in the head

Another officer watched the incident happen and did nothing.

A viral video shows an Atlanta police officer kicking a handcuffed woman, lying prone on the ground, in the head during following an altercation.

A 30-second video clip posted to Instagram by @atluncensored, and onto Twitter shows a woman lying face down on the ground with her hands cuffed behind her back. A uniformed female officer and a large male in uniform stand in front of her. However, the handcuffed woman raised her head, appearing to spit on the prominent officer’s boot. He officer kicked her in the head for her trouble. Another male officer arrives but doesn’t see the kick.

A summary of the initial call provided by the Atlanta Police Department stated officers were called to a “person armed” call around 12:30 pm Monday July 26. Per the summary, the caller said a woman walking around the area had pointed a gun at several people. An update said that the recovered gun was not loaded. The officers located and detained the woman, who was not arrested.

At some point before or after the officer’s kicking of the woman’s head, there were concerns for her mental health, and EMS took her to a hospital.

“Chief Bryant and commanders within the Atlanta Police Department became aware of a video, posted on social media, showing an Atlanta Police sergeant kicking a woman in her head. Upon reviewing the video, the actions of the sergeant appear to be unacceptable and we are also concerned with the apparent lack of reaction from another officer present during the incident. The decision was made to immediately relieve both employees from duty, with the sergeant placed on unpaid suspension and the officer placed on administrative assignment. The Atlanta Police Department’s Office of Professional Standards (OPS) was directed to open an investigation into the actions of all employees on-scene, and their investigation is to be expedited.

“The actions of those in the video appear to fall outside our standards and training. However, it is important for the Office of Professional Standards to conduct a thorough investigation to determine the facts surrounding this incident. Chief Bryant will monitor the progress of this expedited investigation and review the findings to determine the proper course of action.”

According to NBC, APD declined on Tuesday to name the two officers currently being investigated.

Speaking to CBS 46, a witness said she was “totally horrified.” In a press conference, the woman kicked, Ashley Cooley, held a press conference calling for the Atlanta Police Department to change the way they treat people with “mental issues.”

“Atlanta I am tired. Atlanta this has been enough. I have six black children. Rise up Atlanta!” she said.