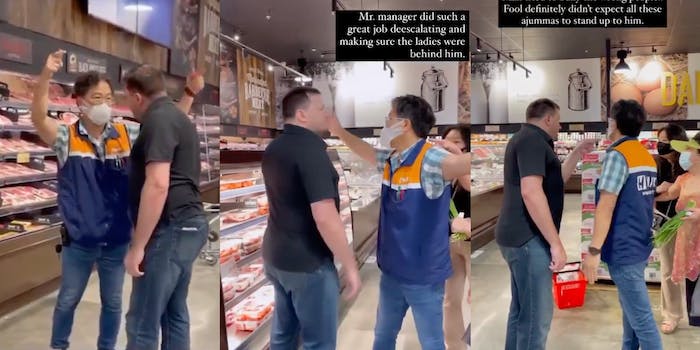 Twitter users are praising a group of female customers, dubbed ajummas, who stood up against the anti-masker.

A video showing a white man threatening a manager and fellow customers at an H Mart is going viral on Twitter. The video was originally posted to Instagram Stories by the user @emilieeetan and reposted by popular Asian American blogger Phil Yu on Twitter. It has been viewed 1.5 million times in a single day.

The incident took place at the Arcadia, California location of the Korean American grocery chain. The clip starts as the unidentified maskless man is getting in the H Mart manager’s face.

In a text overlay, @emilieeetan wrote that the white man refused to leave after the manager asked him to. He then apparently yelled at, threatened to sue, and rammed a grocery cart into the manager. That’s when a group of Korean women stood up for the manager and shouted at the white man to leave the store. The man then began to step toward the women, and the manager got in between them to protect the group of ladies.

“Mr. manager did such a great job at deescalating and making sure the ladies were behind him,” the overlay text continues.

The maskless man wags his finger at the manager and says, “You’re breaking the law.” One of the women asks the man, “Why are you yelling at him [the manager]?” and the man replies that the manager assaulted him. The woman refutes his claim, saying she saw the whole interaction.

“No he didn’t,” she said. “You’re the one who doesn’t want to wear a mask right now. We’re all wearing masks. We’re all complying.”

It’s unclear what occurred before the video, but it appears that the dispute started because the patron refused to wear a mask in the store. As of July 27, Los Angeles County—where Arcadia is located—issued an indoor mask mandate requiring everyone, regardless of vaccination status, to wear a mask indoors.

Some folks on Twitter believed that the maskless man went into the store looking for a fight, implying that H Mart regulars understand store etiquette.

“This is my local H-Mart LMAO it’s located in Southern California in the SGV (Los Angeles County),” one person tweeted. “I’m pretty surprised it happened here since majority of the population here is Asian and we’re serious about wearing masks. That guy prob went there LOOKING for confrontation”

Others praised the women—endearingly dubbed “ajummas,” married or middle-aged women—for being unafraid of the maskless man and for sticking up for the manager.

It’s unclear why the man was there or what happened after the altercation, but the Daily Dot reached out to H Mart and the Arcadia Police Department for comment.