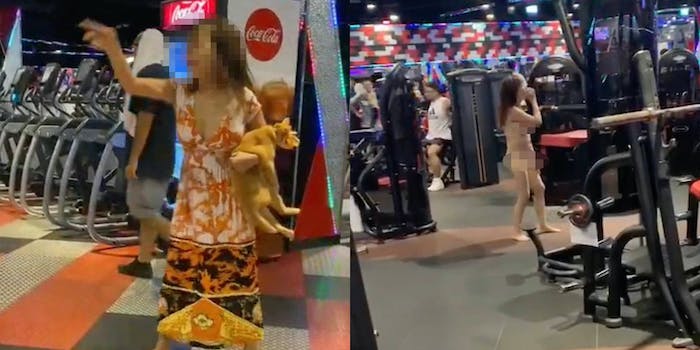 Gym ‘Karen’ takes off clothes, threatens staff because she wasn’t allowed to bring her cat

A viral video shows an angry woman dubbed a “Karen” taking all of her clothes off at the gym and proceeding to exercise inside of a public workout facility after her pet cat was denied entry. The 56-year-old resident of New Taipei City, Taiwan, was reportedly a frequent visitor of the World Gym in Tamsui and had previously been refused entry when she tried to bring in her cat.

Video spread of the incident on social media, showing the Sept. 4 run-in that the woman initiated at the gym. The gym woman is seen cat in arm, yelling at a gym staff member who refuses the woman’s entry due to a strict no-pet policy.

According to translations from the International Business Times, the woman yells at staff members, “I have a gun and a hand grenade. Fuck you!” She then pushes her cat at another staff member and says, “Hold my cat. Let me punch her.”

The woman then strips naked and begins using workout equipment without any clothes on. The video shows her walking around the gym in the nude and using the battle ropes for several short reps.

The incident went on for about 30 minutes before the woman was apprehended by police who had been called to diffuse the situation. They clothed and arrested her.

The International Business Times reports that a World Gym of Taiwan spokesperson confirmed that the woman repeatedly violated health and safety protocol by bringing her pet to the gym. Her membership was officially terminated last month, according to the Daily Star.

The woman was arrested on charges of suspicion of sex offense and causing bodily harm and taken to a nearby hospital for a medical examination.