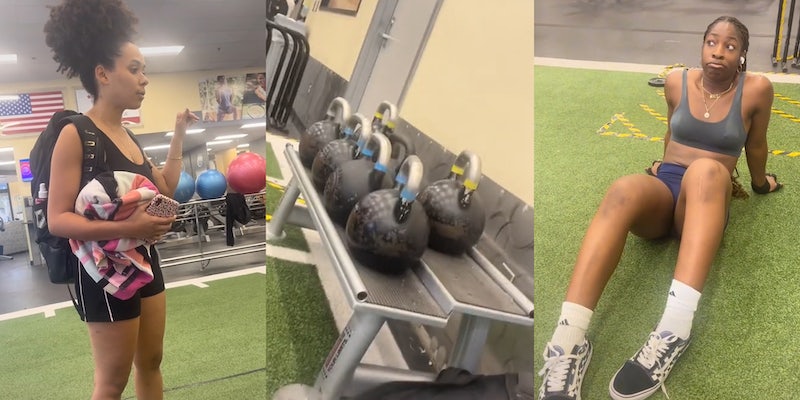 ‘Sis she was intimidated by you clearly’: Karen accuses woman of eyeing her man at the gym

A viral video shows a woman accusing another woman of looking at her partner at the gym.

In a video posted by @abatethegeneral1 on Sunday a woman is standing and confronting another woman, named Bri, in a gym. Bri says that she doesn’t come to the gym to look at the other woman’s man and that the woman is insecure.

“I hear you and I apologize because it sounds like you don’t even know what I’m talking about,” the woman says to Bri. The woman says she and her partner saw Bri at the gym and that Bri slowed down and looked at her man.

In the video’s caption, @abatethegeneral1 asks viewers what they would do if they were in Bri’s position. On Monday, the TikTok had over 1.5 million views.

In a follow-up video, Bri says that before their conversation on camera, she had briefly interacted with the woman. She says when the woman came over to Bri, she said that her partner had told her that “[Bri] was wiping my shorts all in front of him” and “[Bri] was picking up the weights all extra slow.”

“She basically told me the next time her man says something about me looking at him, it’s gonna be on site,” Bri says in the follow-up TikTok. She also says that her brother, @abatethegeneral1, got involved, and they asked the woman’s boyfriend to come downstairs and talk with them. He didn’t, and Bri says the woman ended up saying she felt “silly” about the entire interaction.

In another TikTok about the interaction, Bri says that it boosted her confidence.

“Gym girlies, just be careful. Because haters gonna hate,” Bri says. She also posted the viral TikTok and both follow-up videos on her account, @brithebaddie_2.

Many commenters on @abatethegeneral1’s original video took Bri’s side.

“Her man was definitely the problem & starting unnecessary problems for no reason,” @fineasskim commented.

“Sis she was intimidated by you clearly,” @deahazel30 commented. “As she should be.”

“She should be embarrassed,” @jayt_fitt commented.

The Daily Dot reached out to Bri and @abatethegeneral1.