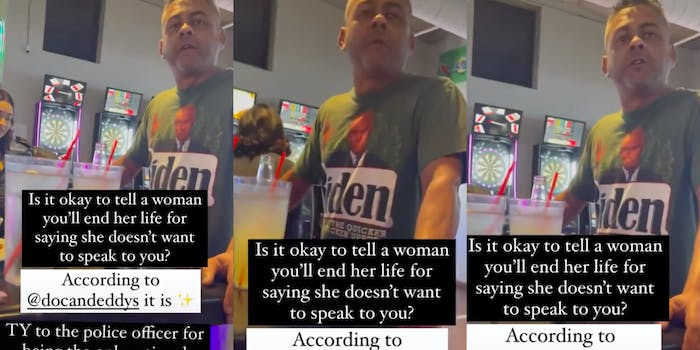 Guy tells woman he’s gonna ‘end her’ allegedly because she won’t talk to him at bar, viral TikTok shows

'Is it okay to tell a woman you'll end her life for saying she doesn't want to speak to you?'

A viral TikTok video shows a man telling a woman he’s going to “end her” at the bar.

The video starts with the man saying he’ll “f*cking end you.”

He is speaking to the filmer, a TikToker named Olivia.

“Yeah, don’t even fucking start,” he replies before making assumptions about her age.

Overlay text on the video questions: “Is it okay to tell a woman you’ll end her life for saying she doesn’t want to speak to you? According to [Doc & Eddy’s] it is. [Thank you] to the police officer for being the only rational person tonight.”

The video received over 993,000 views since it was posted four days ago. Olivia posted a follow-up video, in which she aims to explain how the situation escalated to the point viewers saw.

She says she went to the sports bar with a few people after they attended a funeral. She says she saw, at the bar, someone else who used to be friends with her deceased loved one. She says it was at this point that the man featured in the video interrupted her, which prompted Olivia to say, “I’m not talking to you. Don’t talk to me.”

“And he flipped. It was like a switch,” Olivia says. “He started screaming, getting in my face, saying he was going to end me, that I didn’t know who the eff he was.” She then began filming, she says.

Olivia says the man’s young, female friends defended him and asked Olivia what she had done to him to get him upset. Olivia says she went up to the staff to tell them what happened and that they kicked both parties out. She says she then saw security workers at the bar laughing at her with the man’s friends. Olivia says she also called the police and that the responding officer was the “only one who took it seriously.”

In response to the incident, Doc & Eddy’s put out an official statement on its Facebook and Instagram pages saying that following the video, the bar is getting review-bombed.

“We have received countless one-star reviews and harsh comments from people all over the US across our social media, Google, and Yelp pages suggesting that we don’t care about women or their safety,” it wrote.

Doc & Eddy’s called the situation “very heated and confusing” and acknowledged that “laughter from staff in this situation was completely inappropriate.”

“When the woman alerted staff to the threatening behavior, our staff told the man in question to leave immediately and escorted him out of the restaurant. While this was happening, several other patrons were telling staff that the woman had been combative and had provoked the man, and the entire situation was escalating as people started to take sides. Our asking her to leave was not in any way meant to suggest that we consider her at fault for being threatened. However, because the situation was escalating among several patrons, it seemed safest to ask everyone involved to leave,” it continued.

“A staff member accompanied the woman to the parking lot and stayed with her, specifically to ensure her safety, as we waited for police to arrive. When Tempe PD arrived, after assessing the situation, they told her staff members asking both customers to leave was the correct course of action action,” the statement read.

Olivia told the Daily Dot that she felt the statement released by the bar was “full of misinformation.”

Olivia said no one escorted her outside or waited with her. “I walked out by myself & called the police while waiting out front alone. (Not that they owe me an escort, but lying about it was weird),” she said.

She also accused the bar of lying about what the police officer told the workers.

“He was the only one who waited with me for my Uber after I filed the report- he spoke to one of the security guys for about 30 seconds, and never said anything about them making the right call. The cop left at the same time as me so it’s impossible that he secretly said that when I wasn’t around. The cop was on my side & said I have every right to prosecute if I can figure out the man’s name,” she added.

“Also, the ‘witnesses’ who said I provoked the man were not actual witnesses. There was a large group of the man’s friends there, who did not even witness his threat, but came up to me screaming after. Only 2 of his friends actually saw what happened,” she continued.

She also said she was slated to speak to one of the bar owners about the incident.

“One of the owners did message me and we had a phone call scheduled for yesterday at 1 PM, they canceled an hour before. Since then, they have not responded or reached out to me again,” she said.

She also told the Daily Dot that she didn’t feel the offer to get on the phone was genuine because of “their lies in the statement they released and the fact that they liked multiple comments [on different social media platforms] from their regulars attacking me.”

The Daily Dot reached out to the Tempe Police Department and Doc & Eddy’s.