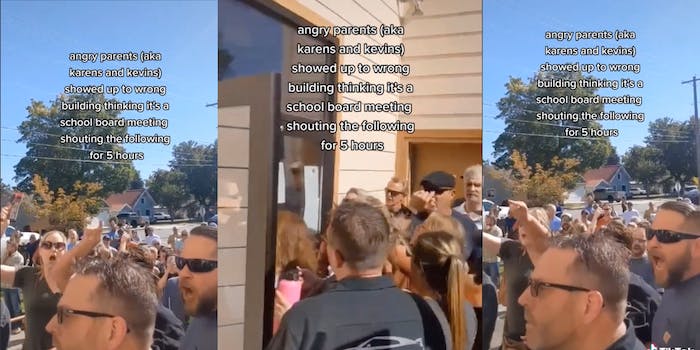 ‘Ma’am this is a Wendy’s’: Group of Karen parents allegedly show up to wrong place to protest masks for 5 hours

'Showed up to wrong building thinking it's a school board meeting.'

A video showing a group of parents protesting a school district’s mask policy has gone viral on TikTok. The group, however, was allegedly protesting at the wrong building.

The caption of the video pokes fun at the parents possibly being at the wrong location: “Ma’am this is a wendys.”

However, some commenters suggested that this is an older video and that context is missing. The parents, they say, may have been in the right place, but the meeting was canceled. It was reposted without very much context to a TikTok meme account. There is no visible signage to indicate where this took place.

“This has a bit of misinformation,” one commenter wrote. “There was a meeting. But due to the sheer size of the crowd and (obviously) no one was masked up they canceled it.”

Another commenter suggested that these people were actually turned away from a school board meeting because it was full.

Multiple people in the comments section referenced this happening somewhere near them or in their hometown, saying the reposter got the story wrong. They did not provide the name of the alleged location.

Others simply remarked on the parents’ opposition to mask policies.

“What do they really have against masks?” one wrote. “Like I genuinely don’t even understand why they are this mad about a piece of material on your face.”

The video has been viewed 1.5 million times and liked 250,000 times since being posted over the weekend.