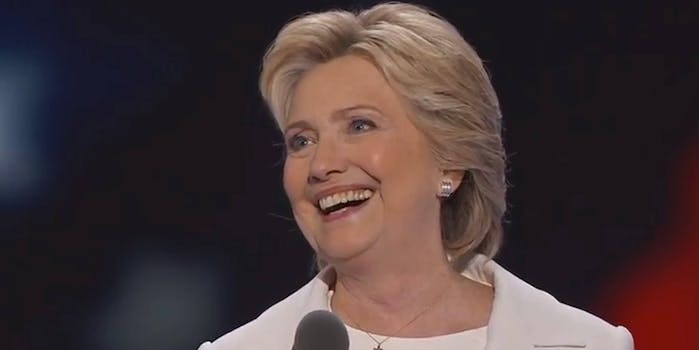 This is one for the history books.

Hillary Clinton sealed her spot in the history books on Thursday night at the Democratic National Convention as she became the first woman to accept a major party’s presidential nomination.

Women all over the world took to Twitter and made their voices heard to commend the historic occasion. Tweets commending Clinton ranged from funny to insightful to downright heartbreaking.

We gathered some of the best ones here:

I'm watching the convention, and I'll say only this:

I did not realize how much this moment meant to me as a woman until right now.

Let's be real here. I wrote part of this story on Clinton's nomination in the NY Times pumping room. https://t.co/vyS1jzqrIZ

When your daughter draws this while watching her speech. #ImWithHer pic.twitter.com/WNNVMCLbH0

As a single mother I say "It takes a village" probably every other day. #imwithher

"Your cause is our cause." Perfect. #ImWithHer @HillaryClinton

My pops has been a registered republican since 1963. He is 71 and a newly registered democrat. ❤️ #ImWithHer pic.twitter.com/Elt51zG11x

The little girl in me just realized, for the very first time, how much it really means to me to see a woman up on that stage. #imwithher

I've lost followers tweeting about @HillaryClinton tonight. And that's fine with me. #ImWithHer

I let my daughter stay up late to watch @HillaryClinton prove that girls can and will run the world. #ImWithHer pic.twitter.com/uhwisLfXqy

The only way this speech could be more inspiring for women is if Hillary Clinton ends it by busting a ghost.

Hillary is giving the speech of her life and there are dudes whining that she isn't smiling enough. pic.twitter.com/ZlooNkAR2Q

A woman is more than clothing, and Hillary is one of the most brilliant, accomplished women in the world.

But that white pantsuit is fire.

Floating away on a cloud tonight. Thank you, Hillary Clinton. #ImWithHer #DemsInPhilly pic.twitter.com/DvMvXHgckN

I have a dream: that all the news networks turn the reactions to Clinton's speech over to women reporters and analysts tonight.

Kind of amazing that we're watching a female presidential nominee argue that her male opponent is too hysterical & emotionally volatile.

The phrase "women's rights are human rights" isn't radical now like it was in 1995. Wanna know why?

A 14 year old abandoned housemaid grew up to raise the first female nominee for president. Read that again.