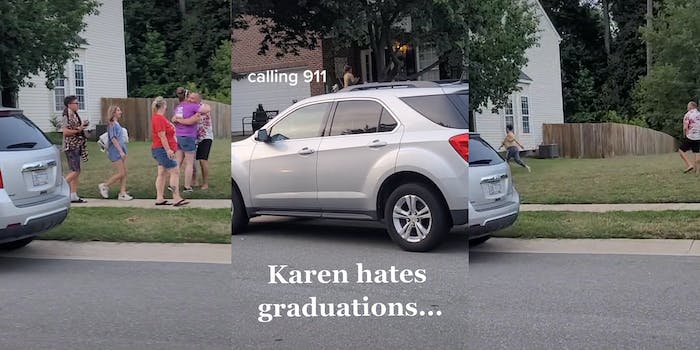 ‘One person who thinks they own the whole neighborhood’: ‘Karen’ calls 911 on graduation party next door, screams at neighbors to stop

'Some people are just so miserable these days.'

In a viral video, a TikToker (@themanlee_) recorded an angry neighbor yelling at a group of people who seem to be gathered for a graduation party. The woman, dubbed a “Karen,” yells at the group while standing on her lawn. Her initial words are unintelligible as “Party in the U.S.A” by Miley Cyrus played in the video’s background.

In the clip, the “Karen” screams at the crowd, telling them that she’s repeatedly asked them to stop. It is unclear what exactly she’s asked them to stop doing, but the creator clarified in the comments section it could be due to fireworks being lit on-site.

“You think this is funny?” she says in the video. She stomps away toward her house before yelling “fuck you” repeatedly. She then walks back to face the group before saying something about her house catching on fire. Towards the end of the video, which now has over 52,000 views, the woman stands outside her front door with a hand on her hip and allegedly starts calling 911.

In the comments section, users debate whether the woman’s response was justified.

“How is it that so many ADULTS are having the wildest temper tantrums these days,” one user commented.

“Some people are just so miserable these days,” another said.

“I can’t imagine being that miserable that you’d be triggered by people enjoying life,” a viewer wrote.

“So what happened after?” a third user asked. The TikToker responded that they “lit off a truckload of fireworks.”