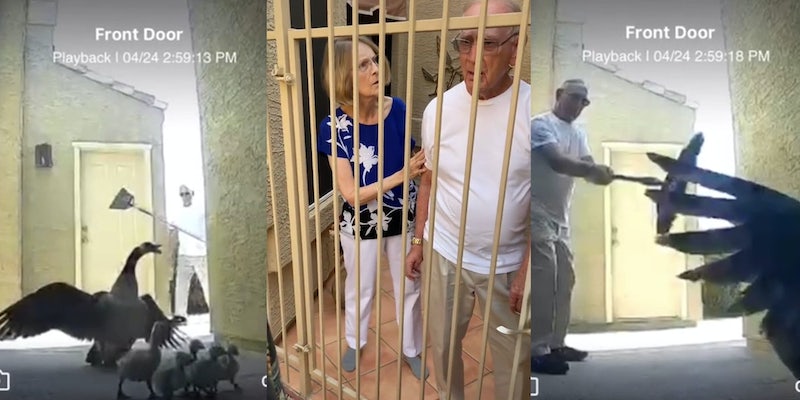 ‘I can’t stand how animals are treated’: TikToker calls out neighbors for hitting wild geese with a broom

'Why would you live on a lake if you can’t handle the wildlife that comes with it!'

A woman calls out her neighbors for hitting wild geese with a broom in a viral TikTok video.

“Why would you live on a lake if you can’t handle the wildlife that comes with it!” reads the caption of the TikTok.

Posted by user @tattedaccountant, the one-minute video shows the TikToker’s daughter confronting her neighbors and threatening to report them to the authorities.

“If they were in your front yard, why would you decide to hit them with a broom into my front yard?” she demands, accusing her neighbor of scaring the geese so they pooped on her property. The TikTok ends with a CCTV clip of the man hitting a goose and its baby goslings with a broom.

It seems like goose poop is a recurring problem in this neighborhood, with some locals seeing the birds as pests while others see them as wildlife to be protected. It’s a classic neighborhood dispute—nd a lot of commenters feel strongly about which person is in the wrong.

@tattedaccountant Why would you live on a lake if you can’t handle the wildlife that comes with it! My daughter didn’t hold back though. Lol #badneighbor #fyp #lakehouse ♬ original sound – Nicole

Viewed almost 250,000 times in the day since its posting, the confrontation sparked backlash on the app, with some commenters saying the older couple should be fined or even arrested for animal cruelty. A few users suggested that this is a particular problem among the boomer generation.

“Older people need to realize there are cameras everywhere,” one commenter wrote. “Thanks for posting. He was wrong.”

The original TikToker replied to this comment: “Oh they know. One of them has one pointed right at my daughters bedroom window. But no one will do anything about that either.”

“Call the fish and game warden,” another comment reads. “He needs at least a fine.”

“That poor mama with her poor scared babies,” another user said. “I can’t stand how animals are treated.”

Very few people spoke up on the man’s behalf, with more TikTokers chiming in that the geese may well be a protected species, and shouldn’t be treated like this by their human neighbors.

The Daily Dot has reached out to @tattedaccountant via TikTok comment.