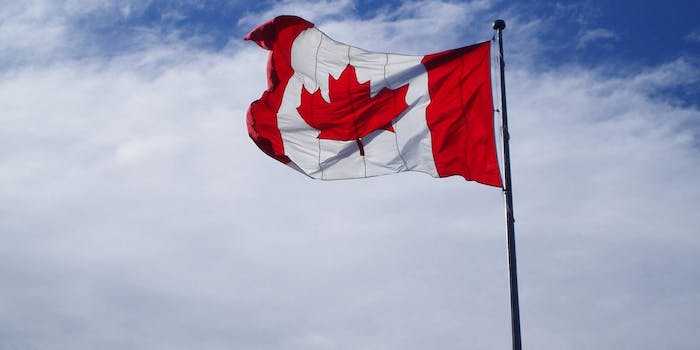 You can now get gender-neutral ID cards in Ontario

When the Daily Dot broke the news this June that an Oregon court had allowed Portlander Jamie Shupe to legally change gender to “nonbinary,” it was a first in the United States.

But Shupe ran into a snag with the Oregon Department of Motor Vehicles. The agency had been blindsided by the court’s decision, telling the Oregonian that it would take months to create a system that would allow for new gender designations on driver’s licenses and ID cards.

“We have statutory and administrative rule changes, we have to change our computer systems and contact our external partners,” Oregon DMV spokesperson David House told the Oregonian. “It’s not as simple as flipping a switch.”

So today, Shupe has a backup plan: moving to Canada.

Shupe’s interest in Canadian citizenship isn’t just a flippant reaction to the looming threat of a Donald Trump presidency. America’s first legally nonbinary citizen joked on Facebook about moving to Canada because there, Shupe can get a genderless ID card immediately.

On June 13, the Ontario government quietly starting issuing health cards—which all Canadian citizens carry in order to access free universal health care—that do not have any reference to gender. The move was an effort to create a more transgender-inclusive policy.

“Many Ontarians do not identify as female or male,” said Government and Consumer Services Minister Marie-France Lalonde in a statement to the Toronto Star. “As society’s understanding of gender evolves, government must adapt. Part of that is being more thoughtful about how and when we collect gender or sex information, and how we use it.”

The government is taking the genderless cards one step further: Starting in 2017, driver’s licenses will also do away with gender binaries. Canadian drivers will be able to choose between M, F, or X as a gender marker.

The “X” gender marker is slowly gaining popularity worldwide as a national policy adoption: Currently, Australia, Denmark, Germany, Malta, Nepal, and New Zealand all allow nonbinary and transgender citizens to choose X instead of M or F on ID cards.

For now, Shupe is sitting tight and waiting to see how quickly the Oregon DMV can adapt to the new legal gender status and offer appropriate IDs to genderqueer and transgender residents.

“I used to research countries that would allow me to exist in my native state of physical being—no trans surgeries, etc.—prior to the court victory,” Shupe told the Daily Dot via Facebook. “New Zealand was on the top of my list, but the citizenship bar is too high. I feel very strongly about my identity.”