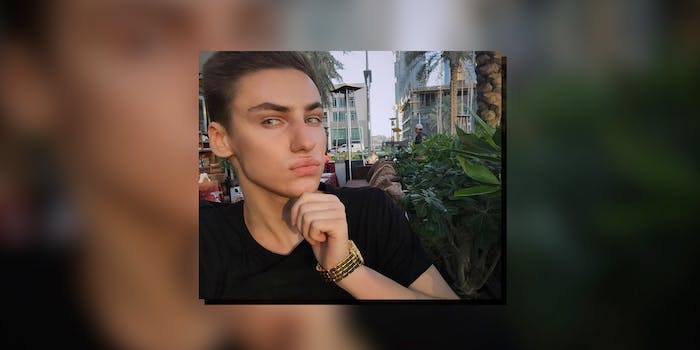 Teen Instagram star jailed in Qatar for two months, claims it was for ‘being gay’

Luxy’s Instagram and Snapchat are popular for a reason. The 18-year-old’s photos show a life of luxury: Cartier watches, Chanel shopping bags, fancy sports cars, and all things gold.

Luxy said that during the first 10 days in jail, his arrest was not recorded and he wasn’t allowed to contact anyone.

“They reported me as missing in Poland,” Luxy told the Daily Dot. “The embassy couldn’t find me in Doha because my arrest was not registered anywhere. I was arrested by people in private clothes and put into a private car. It felt like being kidnapped.”

According to Luxy, once the Polish embassy was notified of his arrest, he was given a lawyer and eventually released, on August 18, almost two months after his June 27 arrest. Luxy shared his arrest papers with the Daily Dot for verification.

After finally getting out of jail, as the Instagrammer told Gay Star News, he was almost immediately arrested again: “For wearing makeup on Snapchat and Instagram. They said I am a woman and I look like a ‘she-male.'”

Luxy is now safely out of Qatar, but he says he’s banned from entering any Gulf Cooperation Council (GCC) countries, like Saudi Arabia and United Arab Emirates. That means the teen won’t be traveling to Dubai any time soon.

Homosexuality is illegal in all GCC member countries, and in 2013 a Kuwaiti official announced that the GCC was considering issuing a controversial “gay test” for foreign visitors suspected of being LGBT. No medically approved test to detect homosexuality actually exists.

Currently, about 73 nations around the world have laws that criminalize homosexuality.

Update 8:08am CT, August 30: The Embassy of the Republic of Poland in Doha confirmed the following to the Daily Dot: “A Polish national nicknamed Luxy, aged 18, was detained at Hamad International Airport in Doha on 27 June 2016 on a charge of money extortion, blackmail, and assault on a Qatari national’s privacy online (cyber-related offense)—and not of being homosexual or because of a minor visa irregularities. His arrest has not been reported to the Polish consular services by the Qatari Police (which is by and large a standard practice in Qatar), until the detainee’s family information at the beginning of July. It is to be noted that Polish consular service has never reported Mr. Luxy missing.” The embassy also wrote that his “arrest conditions were decent and correct” and “no irregular behaviour of any police officer has been reported by the detainee to the consul.”