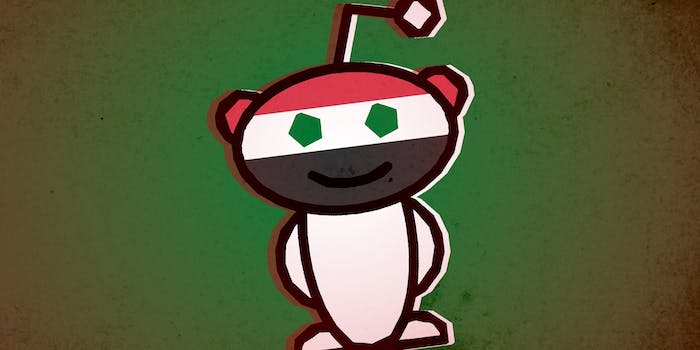 'If I was straight, things would be easier.'

Being gay in ISIS-controlled Syria or Iraq is a life-threatening condition. Under ISIS, gay men and boys are frequently executed in public. Family members, especially male relatives, also often become violent upon discovering an LGBT person’s identity. Some gay Syrians have even been outed by their own therapists.

So for one desperate 22-year-old gay man in Syria, the anonymity of Reddit was a beacon of hope.

The young man posted a cry for help on Tuesday, sharing his story of hiding and suffering, suicide attempts, and family shunning. The painful request for help struck the hearts of redditors who quickly offered words of support.

I think I’ve lost my will to live. I was born in the wrong place. If I was straight, things would be easier. Everyone hates me or doesn’t accept me for what I am. I’ve lived in solitude all my life and never felt happiness or joy.

The gay Syrian described the convoluted and confusing process of trying to flee the country, and seemed unsure of whether there were any options available at all.

I thought about traveling somewhere new, but as you all know no countries are granting visas for Syrian Nationals “except for studying or an invitation visa.” I thought about traveling to Turkey and seeking asylum at the UNHCR but there are 2 obstacles: 1. Turkey no longer accepts Syrians without visas. 2. The process of finding a country to host the asylum seeker is really hard, complicated, and takes a lot of time (maybe a year or more!). I am not thinking of traveling by sea it’s dangerous + not available anymore. I thought about studying in some European country, but the thing is I don’t have a lot of time, maybe 6 months maximum, and I know the legalisation of documents and the whole process takes time.

But the Syrian national said that it would be difficult to engage with Turkish organizations since “you need visa for almost every near country because of the war.”

Many of the organizations that offer assistance to LGBT refugees do so mostly after those migrants arrive. Chicago’s Rainbow Welcome, New York’s Queer Detainee Empowerment Project, and Massachusetts’s LGBT Asylum Task Force all help house refugees or assist them with immigration detention and asylum applications—but finding an organization that can help a person escape through their nation’s borders is a steep task.

Still, redditors jumped in to help in whatever ways they could—from a Turkish resident offering to translate documents to a Dutch native offering a place to stay “if there is anyway you could make it to the Netherlands.”

The Syrian’s last comment on the thread revealed that he’s considering applying for a student visa to study in Europe.