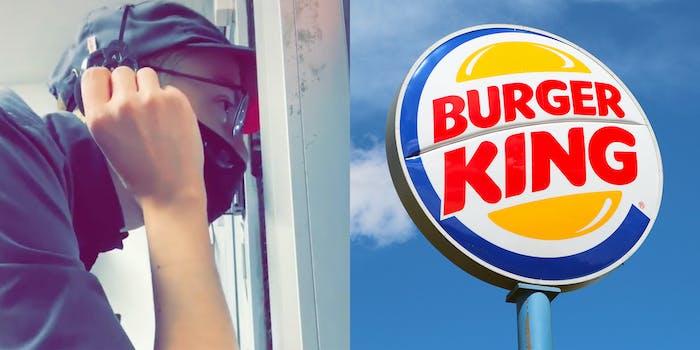 ‘Use your gay powers to make him uncomfortable’: Burger King worker gets back at customer who allegedly harasses female co-workers (updated)

'When an old man harasses your female workers.'

A Burger King employee went viral for “hitting on” a customer who allegedly frequently harasses his female co-workers.

In the TikTok video, Matthew Cast (@mxttewcast) uses the customer’s alleged own pickup line on him.

“You know what would look good on you?” Cast asks the customer. “Me.”

Cast winks before sliding the window closed. According to the caption, it is the same pickup line the customer used on one of the female employees the week prior. “Customer comes and harasses my female co workers often,” the TikToker alleged in the caption.

In the overlay text, Cast wrote, “when an old man harasses your female workers, use your gay powers to make him uncomfortable.”

The TikTok was posted five days ago and has since garnered more than 28,000 views. Most of the comments are users praising Cast for sticking up for his co-workers.

“You a real one fa that,” a top comment read.  “Absolute legend.”

The customer is off-camera for the entirety of the video. However, some viewers expressed wanting to see his reaction.

“I wanna see his reaction so badly,” one viewer said.

“I gotta know his reaction, did he get mad or say anything after,” another said.

Update 9:58am CT Feb. 25: When reached for comment, Cast told the Daily Dot he did not expect the video to go as viral as it did.

He alleged the customer in question harasses his co-workers “often.”

“What made me want to confront him in that manner was that he used the same pickup line on one of the female managers a week prior,” Cast said.

Cast claimed the customer “was stunned” but eventually hit on him in response. Cast said he’s only seen the customer once since the incident and that his co-workers were “excited” when he stuck up for them in this way.

Cast also said he’s not worried about getting reprimanded at work because “some things need to be done.”

“I also don’t think of how much trouble I can get into lol,” he added.