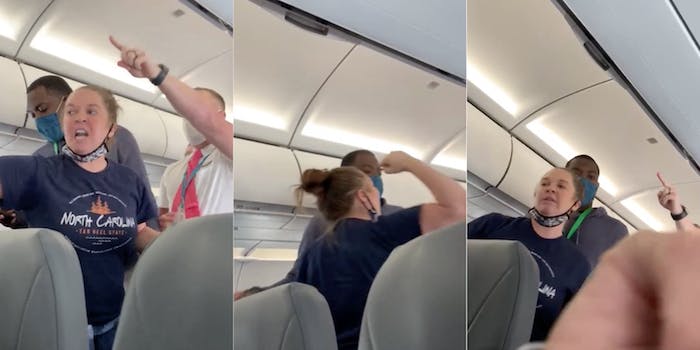 A popular new Reddit video shows “Frontier Karen” melting down on a flight and calling a Black passenger “Shaniqua.”

“I was getting off peacefully,” Karen says as the video starts, just before takeoff on a Frontier Airlines flight. She’s hitting the hands of the two attendants who are trying to get her off the plane.

Karen—whose face mask is down around her chin, of course—is adamant about certain people not clapping in satisfaction as she’s forcibly removed from the flight.

Karen is specifically arguing with one woman who is mostly offscreen. The woman dares Karen to come to the back of the plane and fight: “Bitch, you got the right one! Pop on me, bitch!”

Karen says she can’t get back there, which is probably lucky for her; if a woman on a budget flight is yelling about being the “right one,” it means she’s the wrong one to fight. Frontier Karen gets off easy and is escorted off the flight along with her things.

The other woman taunts her as she leaves, yelling, “Bye, Karen!”

By assigning the woman a racist, stereotypical name, Karen makes a false equivalence with Karen. As a Redditor wrote in the comments: “Friendly reminder that Karen’s can be any color. White women, please stop saying it’s a racist term.”

As Karen exits the plane, the videographer expresses her pleasure: “I got my first crazy video.”

Redditor u/throwaway12313223123 wrote: “Best part is the video owner saying she got her first crazy video. Haha. This is like the new normal… who can capture a video of some anti-masker losing their shit.”