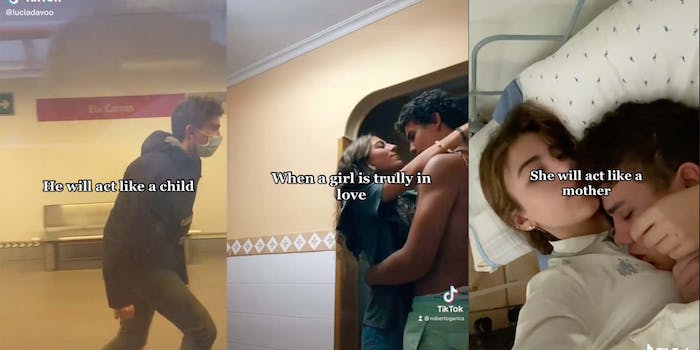 ‘Freud would have a field day with this’: Viral TikTok saying women act like mothers, men act like children when in love sparks debate

'No way in hell am I dating a man that acts like a child.'

In a TikTok posted on Jan. 4, Lucia (@lucia.davoo) shows a montage of her and her boyfriend. The overlay text of the video states that in heterosexual relationships, women will act motherly toward their male partner, who will act childlike.

The video has not only been viewed over 6 million times, it has also gotten over 13,000 comments.

While the narration used in the TikTok is not Lucia’s, commenters have picked up on Freudian themes in her video—which may have been inadvertent. Psychologist Sigmund Freud coined the term Oedipal complex “to describe a child’s feelings of desire for his or her opposite-sex parent,” according to Verywell Mind. The term Oedipal refers to the Greek myth of Oedipus, who married his own mother.

“Sigmund would be overjoyed by this news,” wrote @culpr1tt.

TikTok user @joan.milbs even posted a duet of the video that’s gone viral, in which she wrote “Freud would have a field day with this y’all.”

However, some commenters under Lucia’s video disagreed with the Freudian interpretation.

“I don’t think it means the women will act like the man’s mother,” commented @angd213. “More like she wants to take care of him, protect, care, support and nurture.”

Others rejected the notion of a woman acting motherly toward her male partner.

“When a boy is truly in love he will not expect his girlfriend to be his second mom,” wrote @briarosario, creating a play on @lucia.davoo’s words.

“No way in hell am I dating a man that acts like a child,” commented @makennacosttoomuch.

The Daily Dot has reached out to @lucia.davoo via TikTok comment.