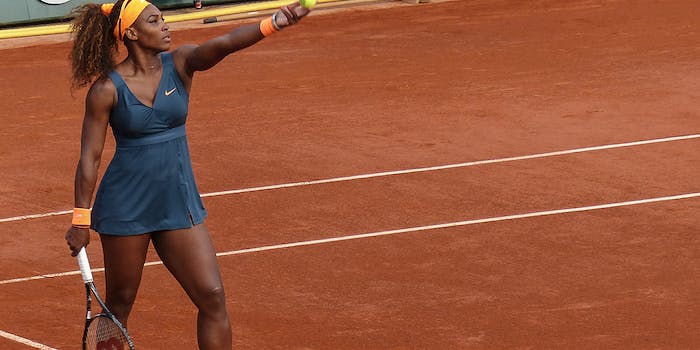 Meanwhile, the man at the top of the list is a convicted domestic abuser.

If it wasn’t already clear there is a gender wage gap in sports, Forbes‘ latest report on the world’s highest-paid athletes shouts it from the newsstands. In the first time in the publication’s history, only men have made the list.

In total, $3.8 billion was paid out to 100 male athletes, with 23 percent of payments coming from endorsements and appearances alone. Professional boxer Floyd Mayweather was paid the most, followed by soccer players Lionel Messi and Cristiano Ronaldo. Mayweather’s particularly high pay comes from his fight against Conor McGregor, which landed him a $275 million payout after he won. The rest of Mayweather’s payments over the past year came from professional endorsements, in which he cashed in $10 million. It seems Mayweather’s long history of violence against women—accounts he has pleaded guilty and has been convicted over—has not hurt his career one bit.

Last year, Serena Williams was the only woman among Forbes‘ highest-paid athletes, ranking at 51 in 2017 after earning $27 million. But after she took time off to recover from her pregnancy and care for her newborn daughter, Alexis, she did not qualify for Forbes‘ 2018 list. That sends a particularly disturbing message to female athletes everywhere, suggesting that women are financially punished for going on maternity leave.

Williams is a bit of an exception in the world of professional athletics, too. During Forbes‘ 2017 report on the world’s highest-paid female athletes, fellow tennis star Angelique Kerber ranked second with $12.6 million in total payments, followed by NASCAR race car driver Danica Patrick at $12.2 million. Tennis player Simona Halep rounded out 2017’s top 10 list with a mere $6.2 million.

In comparison, Charlotte Hornets basketball player Nicolas Batum tails 2018’s top 100 list with $22.9 million in total income, meaning that there’s at least a $10 million gap between him and Patrick, 2017’s second-highest-paid woman in sports. When it comes to professional athletics, the messaging is clear: Men are worth more than women for their hard work. Men, like Mayweather, can harm women and remain at the top of their careers and pay scales.

The double standard between men and women in professional sports is as old as America itself. Traditional, established sports leagues and associations are run by men, dominated by men, and largely created for men, and thus, male athletes are treated as the sports world’s default standard for performance and skill. Women’s sports are largely disparaged or downplayed, and as a result, female athletes’ accomplishments are too.

For the first time ever since Forbes started compiling the world's 100 highest paid sportspeople, there is not a single woman in the list. Not one.

What a damning indictment of the enormous disparity between men/women's sport. https://t.co/3O1tu5RTZb

According to Forbes Magazine, Floyd Mayweather Jr. is the highest-paid athlete in the world and there are no women in the top 100. Both those facts say a lot about the world of sports.

It's actually just really disgusting that anyone is paid this much for anything, firstly. Then secondly, they don't share it to make the world a better place.

Imagine if every man on this list gave 1% of his salary to support #WomenInSporthttps://t.co/40ck3s2dEh

Worst result in almost a decade for women as the gender pay gap continues to grow larger in sport.. #WomenInSport #womenssports https://t.co/wqKANUx6Bh

When there’s a gender wage gap—or in this case, an abyss—in any profession, there’s always a larger cultural problem that’s to blame. It’s time for sports to start taking its female athletes seriously. If more attention and money was paid to women in sports, then perhaps audiences would grow beyond your average upper-income male fan.