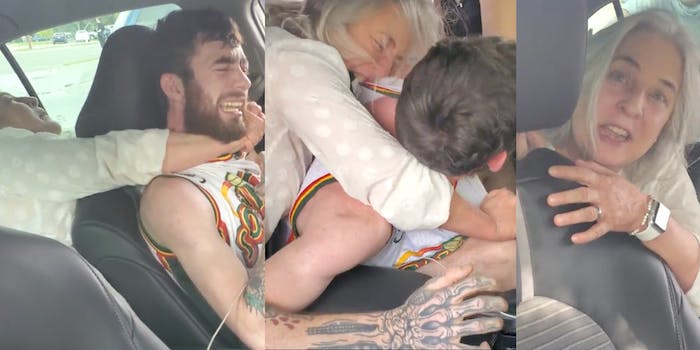 'Please stop, I have done nothing to deserve this,' he begs her.

An Uber driver in Florida was instructed to get his passenger home safe, but it was he who was in need of extra protection.

Driver Michael Hassey Jr. reportedly picked up the passenger, Michele Stilwell, from a Tampa restaurant on April 17. Hassey Jr. told WFLA that Stilwell’s daughter called the woman a ride home. Stilwell was allegedly asleep for most of the car ride but woke up blocks from her home. When she awoke, she apparently began attacking Hassey Jr., shouting “die” at him, and calling for her daughter. In a video, Stilwell is seen choking Hassey Jr. and yelling “never” at witnesses demanding her to let him go. Throughout the video, Hassey Jr. struggles to breathe and repeatedly asks the passenger to stop.

“Please stop, I have done nothing to deserve this,” Hassey Jr. begs.

Stilwell then takes a bite out of Hassey Jr.’s neck before the man exits his vehicle. Stilwell was arrested and charged with aggravated battery and tampering with a witness. She is currently out on bond.

WFLA spoke to a man identifying himself as Stilwell’s husband, and he said that Stilwell did not remember the attack. A police report obtained by WFLA showed that Stilwell may have been intoxicated.

Hassey Jr. described the experience as traumatizing and told WFLA he was seeking mental health assistance. He also indicated that he wished for a stronger response from Uber and said he was not contacted by the rideshare app after the incident happened.

In a statement to WFLA, a representative from Uber said, “What’s been described is disturbing. Violence of any kind is not tolerated on the Uber app, and we immediately removed the rider’s access as soon as this was reported to us.”