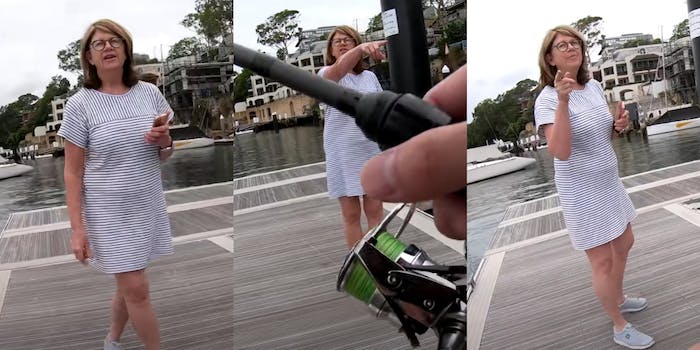 'I tried to release it, but it didn't release. So, I did not kill it.'

In a YouTube video also trending on Reddit, a “Fishing Karen” in Sydney accuses a fisher of killing fish and throwing them back into the water.

The video was posted to a sport-fishing page with the handle of Shroom on New Year’s Eve. The caption says: “Despite my best efforts to release a fish that I caught, it ended up floating later.”

A middle-aged woman, who had been watching him, walks up to Shroom asking: “Why did you just kill that fish and throw it back in and kill it?”

She replies, “You did so; I saw it, and it’s floating here.”

Shroom says, not completely making sense, “I tried to release it, but it didn’t release. So, I did not kill it.”

“You did. I saw it here, and it was flapping up and around,” the fishing Karen responds. “Can I see your fishing license please?”

The woman holds up her phone to film him during the altercation.

Shroom tells her he has a fishing license and says he’ll put her “on YouTube as well.”

“I’ve done absolutely nothing wrong. I know my rules,” Shroom says while reeling in his line.

He explains: “That’s OK, that’s OK you can call the DPI now if you want, the Department of Primary Industries, you can give them a call.”

The woman adds “and Balmain Police,” and walks back down the pier. Balmain is an affluent inner suburb of Sydney.

As he throws his line back out, he tells her, “Go ahead.”

What happened with the dead fish is an everyday experience, as sometimes occurs during a catch-and-release. Catch-and-release is a controversial fishing technique, and Shroom’s outcome could be deemed cruel. In any case, it’s completely legal in Australia, complete with recommended guidelines.

Commenters noted how futile her complaint is, especially if she puts in a call to the police: “Don’t understand what she’s trying to achieve… She’s gonna call the police & say ‘old mate was fishing & he released the fish but it died?!’ Cops will laugh at her.”