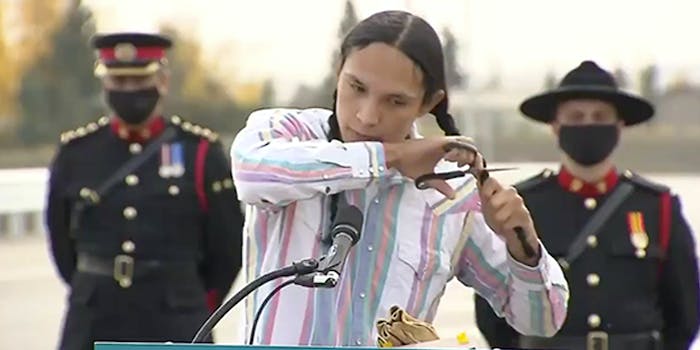 'For the past 6 years I have had to see my home destroyed and changed every single day.'

A video gaining traction on Twitter shows an indigenous man cutting his hair to honor the land from which a Canadian construction project displaced his family. He says that a portion of the new Calgary southwest ring road, the Tsuut’ina Trail, which opened for traffic Thursday, divides land from the First Nations community and was built on stolen property.

The video has been viewed over 2 million times on Twitter and shared over 20,000 times.

Global News reports that an event was held on the road Thursday where Tsuut’ina First Nation Chief Roy Whitney was present. He stated that the construction project will help to bring future economic prosperity for the community in the form of high paying jobs and business opportunities.

According to Global News, the project began construction in 2016 and has created upward of 2,000 jobs.

The viral video begins with 26-year-old Seth Cardinal Dodginghorse saying, “I am going to speak, and you are going to listen.”

“If you look straight down that way, you can see where my family’s home was. People are going to be driving on my family’s home,” he says. “I woke up to see my mother crying when she heard the news that this road was going to be opening. For the past 6 years I have had to see my home destroyed and changed every single day.”

Dodginghorse shares that he will “leave a piece” of himself with the road to honor his family and their lost land. He pulls out a pair of scissors, cuts both of his braids, and then scatters the strands on the road.

Construction will continue on the road, and it’s estimated that it will be completed in 2024. Dodginghorse says that his family will be mourning the loss of their home for years to come.

“[It] affects us directly. We lived here. We grew up here. We touched that land. The way this land was taken was not healthy nor well done,” he said.