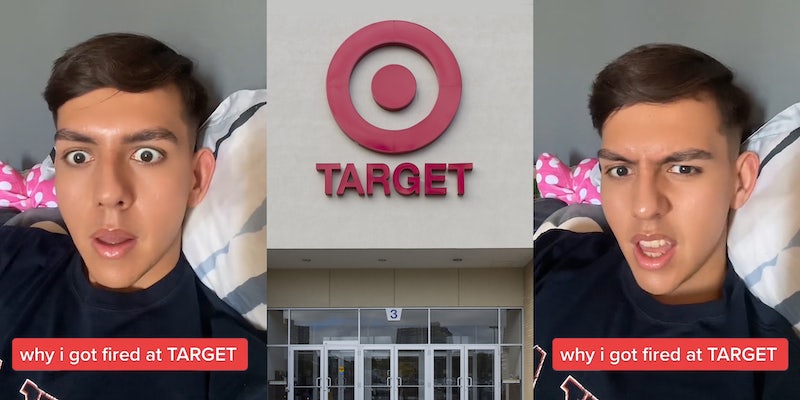 ‘It frustrated me that she didn’t care about my current medical condition’: Target worker says he was fired after his manager accidentally heard him call her a ‘b*tch’

'It’s not worth risking your health for a minimum wage job tbh.'

A TikToker known for posting about his job at Target recently announced he has been fired from the company after his manager heard him call her a “bitch.”

TikTok user July (@badbitchjuly) shared in a video that the reason he got fired dates back to Mar. 30, the day he says he got into a car accident that “fucked up” his shoulder and back.

After the accident, July says he went to work with a doctor’s note that restricted him from doing certain aspects of his job like lifting heavy things and working the register. One day, one of his managers approached him at the order pickup desk, where a group of five employees was standing, he says. The manager allegedly asked him to help out as a cashier, but July says he didn’t appreciate being asked to help since he still had medical restrictions. He says he told the manager that he had his work restrictions but he’d try to help.

After checking out one customer, July told his manager he couldn’t help on the cash register anymore because of his injuries. He says his manager got “so upset,” but he was able to back to order pickup. Still, the manager continued to ask him to help as a cashier on other days.

“I couldn’t be on a lane, and it just frustrated me that she didn’t care about my current medical condition so I took it to HR,” July says in the video. “I had to report her to HR because she clearly didn’t give a flying fuck.”

In a follow-up video, July says the Human Resources department spoke with his manager and explained that he had a doctor’s note saying he can’t do the tasks she was asking him to do. Three months later, his manager asked him to work a cashier shift again. He says the request annoyed him because he was still injured from his car accident. Frustrated, July says he began ranting to himself, calling the manager “a bitch,” all the while unaware she was standing behind him listening. According to July, the manager simply said, “thanks for answering my call” and walked away.

In other videos, July says he tried to have a conversation with the manager, but she “never made time for it.” One day, he says he called out of work because his back hurt and he wasn’t feeling well. The next day, he went to work but was stopped by HR before he could clock in for his shift.

July says he was taken to “have a chat” with HR, who told him they had heard about the incident with the manager. He says it seemed like the manager told HR he had talked poorly about her in front of other workers, even though he had only been talking to himself. He wasn’t able to give his side of the story and wishes now that he had stuck up for himself, July says.

As HR fired him, they showed him previous issues they had had with him, such as a couple of no-call no-shows and a viral TikTok about working at Target that he had previously posted.

“I didn’t even have anything to say, I was like whatever, I gotta get my money and dip,” July says.

Some viewers urged July to sue Target for firing him without warning or to at least apply for unemployment wages. In a comment on one of the videos, July wrote, “no I ain’t suing or nun of that for no minimum wage ahh job, i’ve moved on.”

Other viewers assured him he could find a better job than the one he had at Target.

“It was meant to be hun. It’s okay, there’s better jobs out there,” one viewer commented.

“Hopefully something good comes out of this and you find a job that you love more. I’m always hearing about the management at Target. So sad,” a second viewer commented.

Other viewers said it sounded like July was “set up” to be fired.

“It sounds like they set you up,” one user said.

Another user wrote, “sounds like they were just accumulating stuff on you based on whoever else might have reported u. it’s shady. workplaces are filled with shady ppl.”

The Daily Dot reached out to the creator via TikTok comment and to Target via email.