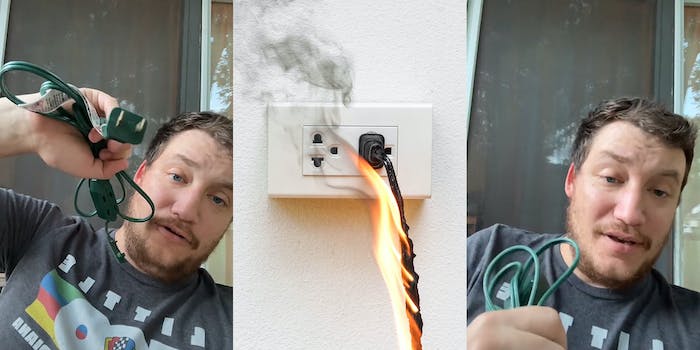 ‘I’ve seen more fires caused by these pieces of sh*t in my career than just about any other electrical source’: Fire investigator warns against extension cords from Walmart because they lead to fires

'Not me watching this with my phone plugged into one of these right now.'

A TikToker who says he’s a professional fire investigator tells viewers not to buy cheap extension cords from Walmart in a now-viral video, saying that they can cause house fires.

In the video posted by TikToker @disastroushistory on Wednesday, he holds up a green extension cord saying it is the “one extension cord you should never use.”

“These pieces of shit right here. There’s no ground plug on it. They’re super-duper cheap at Walmart. They come in black, brown, and gray. And obviously, green,” he says in the clip. “Don’t use it. If you are using it, unplug it. Throw that shit away. I have seen more fires caused by these pieces of shit in my career than just about any other electrical source.”

The creator does not specify the specific brand of extension cord shown in the video but suggests finding one with “the right sized gauge and wiring for the extension cord” for anyone planning to use one long-term.

The video has amassed over 606,700 views as of Thursday, with commenters realizing that they are using the potentially hazardous type of extension cord.

“Me immediately making eye contact with mine,” one user wrote.

“You are a godsend for us women living alone. I use those at Christmas all the time lol,” another said.

“Me watching this while my phone charger is plugged into a brown one of those,” a third added.

In a follow-up video, @disastroushistory provides more detailed recommendations to viewers who want to ditch their old extension cords for a safer alternative. He suggests opting for a cord with “thicker insulation” around the wire and a “ground plug.” He also recommends buying a surge protector.

The Daily Dot reached out to @disastroushistory via TikTok comment.