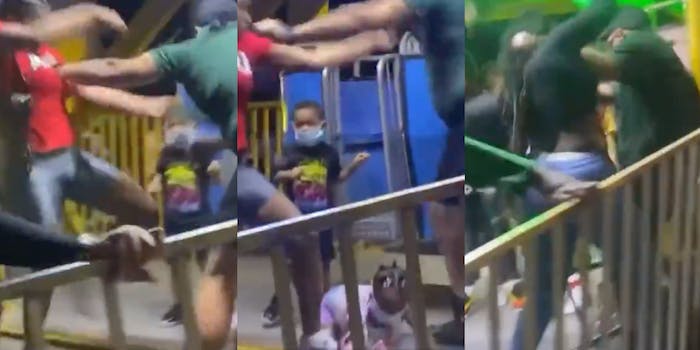 ‘Whole park got a lick in’: Bystanders thrash Ferris wheel operator after he attacks woman and children

Vigilante justice at its finest.

A Florida Ferris wheel operator received a thrashing from a crowd of onlookers after he attacked a woman and her child.

A 40-second video of the incident, shared on Saturday evening by Twitter user @jusbeinqgabby, quickly went viral. At the time of this writing, it has earned more than 81,000 likes and 26,000 retweets.

The video appears to have been filmed in Miami-Dade County, Florida, at the Opa Locka Hialeah Flea Market Carnival, Newsweek reports. At the start of the video, a ride operator is holding a Ferris wheel car occupied by a mother and her two children.

An argument seems to have directly preceded the video. The mother, appearing annoyed, steps out of the ride with her daughter in tow and shouts a few unintelligible words at the ride operator.

Things escalate almost immediately. As soon as the woman steps up to the ride operator, he lunges at her, shoving her back and knocking the child to the ground as he screams, “Shut the fuck up, woman!”

Before the mother even has a chance to react, the crowd rushes to her aid. Two bystanders put themselves between the ride operator and the mother, who promptly snatches her children out of the line of attack.

Good thing, too, because a massive brawl soon breaks out in front of the ride entrance. Bystanders swarm the ride operator and pummel him with punches and kicks. People are simultaneously joining in the beating and trying to break it up. The ride operator disappears from sight behind a sea of furious bodies.

The fight appears to have mostly broken up by the time the video concludes.

A longer version of the video, shared by user @BADboom84, shows the ride operator acting aggressively toward other patrons before the viral clip begins. At one point, he begins to assist someone off the Ferris wheel, only to abruptly change his mind and move the cars as the passenger tumbles back into their seat.

Another moment shows the operator charging like a bull toward a man who appeared to be criticizing him.

The viral video received largely positive feedback on Twitter, with many people joking about the community beating the man received. As one user put it, “Whole park got a lick in.”

Another person joked that the fight scene mirrored “that one scene from Avengers: Endgame with all the female Avengers.”

Other viewers were distressed over the child who tumbled when the fight began. While she’s not clearly visible at the end of the video, her mother can be seen yanking her away from the fight just as the violence escalates.

The family is far enough from the brawl to remain out of frame for the remainder of the video—allowing the fellow carnival-goers to exact their vigilante justice on the aggressive Ferris wheel operator.