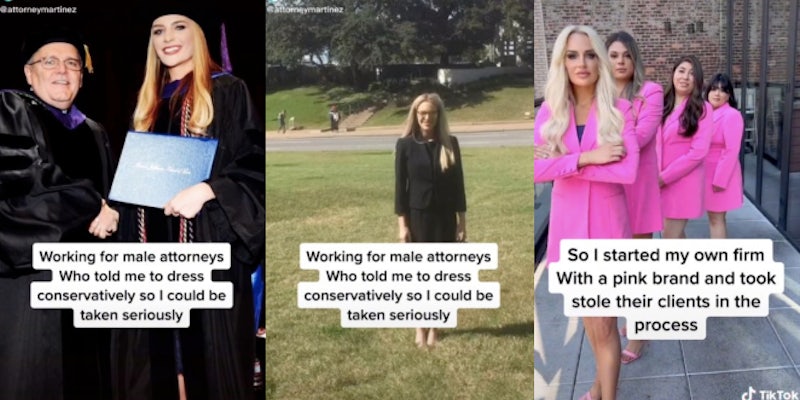 ‘It’s almost like the clothing doesn’t define the work you can do’: Lawyer says male bosses told her to dress conservatively to be taken seriously, so she started her own firm and ‘stole’ their clients

A lawyer on TikTok was dubbed the “real-life Elle Woods” after she created her own law firm and hired a full team of women when male attorneys at her old firm told her to wear conservative clothing to be taken seriously.

TikToker and virtual immigration attorney Kathleen Martinez shared the viral video, garnering over 3.8 million views, of her journey through the male-dominated field.

The video begins with a photo of Martinez graduating from college.

“Working for male attorneys who told me to dress conservatively so I could be taken seriously,” the overlay text reads.

She shared a few more photos of her in conservative dress and used the “tip tap” foot transition created by Yonn Don to reveal her new look. The next clip is of Martinez and three other women wearing bright pink blazers and light pink heels.

“So I started my own firm with a pink brand and took/stole their clients in the process,” she said through overlay text on the video.

In the comments section, users shared their excitement for the firm and sent her their well wishes.

“It’s almost like …the clothing doesn’t define the work you can do. Way to go ladies!!” another said.

The Daily Dot reached out to Martinez via TikTok comment and email.