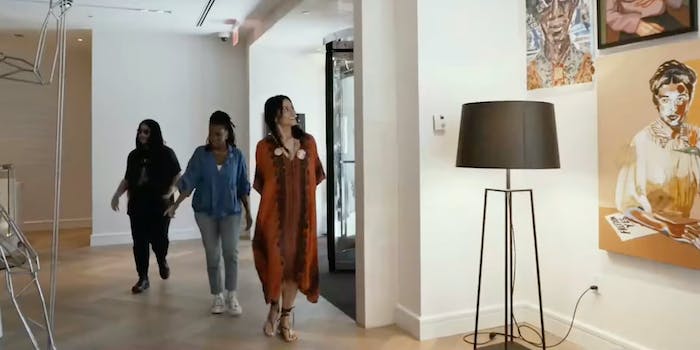 A portrait of Ruth Bader Ginsburg made of 20,000 tampons is featured in the hotel.

Obviously, the way to show you care about women is through tampon art. No, it’s cocktail drink names. No, no, I got it—it’s by hiring a man for a central leadership position.

This is all true of a Hotel Zena, a renovated downtown D.C. hotel that markets itself as a place “dedicated to female empowerment.”

Suffice to say—people on Twitter are not having it. They’ve accused the hotel of performative empowerment. In addition to hiring a man for the prominent executive chef role, the hotel uses language that excludes non-binary and genderfluid people, as Jes Skolnik, senior editor of Bandcamp Daily pointed out in a tweet.

Skolnik described Zena as a TERF—trans-exclusionary radical feminist—hotel when referencing this line from the viral Eater article that prompted online critique:

“All of the 60 art pieces on-site were painted, photographed, sculpted, or stitched by ‘feminists of both genders around the globe fighting for human rights.’”

Others have pointed out that if the hotel truly wanted to be empowering, it would have taken more concrete and impactful actions like hiring an retaining a diverse group of women, femmes, and nonbinary people throughout the team, including in leadership roles and developing meaningful partnerships with local organizations.

People also can’t seem to get over that the hotel reportedly commissioned a portrait of Ruth Bader Ginsburg made of 20,000 painted tampons. Users pointed out that, instead, it could have given those tampons and other period products away, helping thousands of locals who can’t afford them.

It remains to be seen if any of the online backlash will make way for change within the hotel.

The Daily Dot has reached out to Hotel Zena.