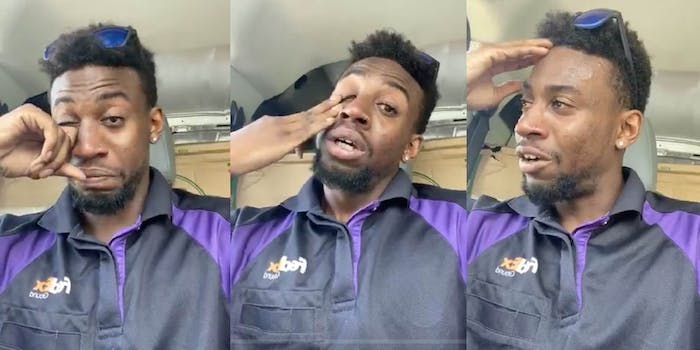 FedEx driver says he was spat on, called the N-word (updated)

Police are investigating the incident.

Brandon Brackins, a 23-year-old FedEx driver located in Ohio, tearfully recalled being spat on and called the N-word in a Facebook Live.

In the video, Brackins says that while he was taking packages out of the delivery truck in the “country,” a “hick” sped around him, almost hitting him before calling him the N-word and spitting on him.

“Why? Why so much hate? Why so much hate?” a tearful Brackins asks. “I’m usually really good with words. I really don’t let that shit get to me, but when you almost hit me and spit on me and call me an N-word—What?”

The incident occurred on Wednesday, in the midst of weeks-long nationwide against racism. “What the f*ck is the point of all this protest shit if it don’t work?” a seemingly defeated Brackins asks.

Residents of Lisbon, where the incident happened, are trying to show “solidarity and support” for Brackins with “Hate Has No Home Here” house signs, according to Heavy.

“We want to plaster Lisbon with these to show ALL are welcome here and to also send a message to the racist idiot who assaulted this young man,” one resident wrote on Facebook.

Update 12:49pm CT, June 14: When reached for comment, FedEx said it verified a police report was filed and an investigation underway.

“We are both saddened and outraged by what our team member experienced and describes in this video. This type of behavior has no place in society, and our first concern is for our team member. We are staying connected with him and offering our support,” it said in a statement. “At FedEx, our workforce is as diverse as the world we serve, and we believe that everyone deserves respect.”