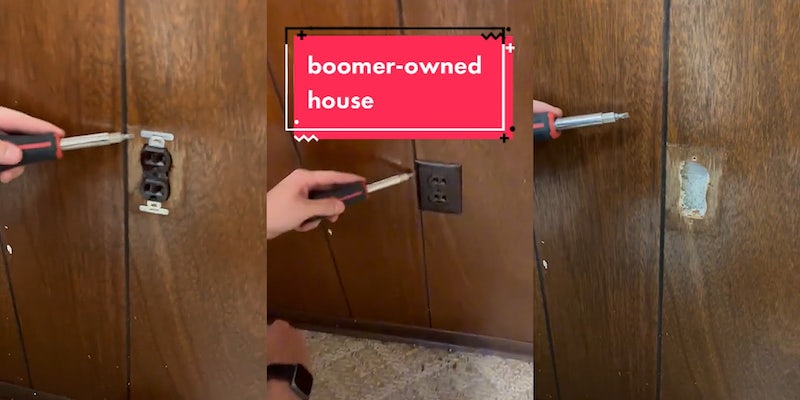 ‘If anyone is wondering what it’s like getting a house from a boomer’: TikToker finds fake outlet in the home they purchased

'This is how one tricks an inspector.'

A TikToker has gone viral after revealing that an outlet in a formerly “boomer-owned” house they moved into was fake. Their video exposing “one of the many things” they noticed about the house amassed over 1.3 million views as of Sunday.

As someone inspects the outlet, the TikToker Em (@rustys.mustache) says, “If anyone is wondering what it’s like getting a house from a boomer… it’s a fake outlet.” The person then flicks the legitimate-looking power outlet with a screwdriver, which then falls off from the wall with ease to reveal that it wasn’t actually functional whatsoever.

Another rendition of the fake outlet reveal received over 2.8 million views, this time featuring popular audio “It ain’t got no gas innit.”

In the comments, there was a debate over whether or not the previous owner intended the outlet to be a fake.

“It’s called ‘getting it to pass inspection’ KAREN!” one commenter joked.

Another added, “Each room requires at least 2 outlets to meet code. This is how one tricks an inspector.”

A third suggested, “I think this was put there to make it look like the house had more outlets which would make it more sellable. Or, they were just trying to cover a hole.”

Other commenters speculated that the fake outlet was designed to hide things.

“My parents had one [fake outlet] to put valuables in,” one commenter noted.

“Lots of folk did that as a secret hiding place,” a second commenter wrote.

Nonetheless, the TikTok sparked a debate over the immediate speculation that the previous owner was a “boomer.”

“My parents are boomers, they take immaculate care of their home,” one comment read. “The boomer generation is so massive you can’t really put them in a category like that.”

Another read, “Most likely it was a Boomer’s parent. Paneling was big in the 50s-70s. Boomers were barely old enough to own a home in the 70s.”

Meanwhile, a third comment read, “I’m sure in 30 years people will say ‘what its like getting a house from a millennial.'”